What Psychiatry is Coming To 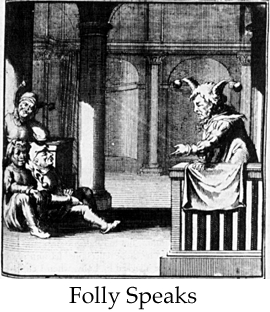 "Things are in the saddle, and ride mankind."

The other day a friend of mine, as we say, saw a young man with garden-variety anxiety and depression, with some alcohol abuse thrown in. This fellow wasn't unpleasant exactly, but he had a kind of curt, impatient, and "Can't we just get this over with" manner.

They (my friend and this fellow) agreed that sobriety and AA were crucial to his success, and they came around to the question of medications for his affective and anxiety symptoms. His wariness was palpable, and the doctor certainly wasn't pushing for anything (too much substance rather than too little seemed the problem here).

Finally the fellow matter-of-factly announced that he and his wife would research some medications online and would be back in touch. "I would never let a doctor pick my medication," he declared, not in a hostile way and without any apparent awareness that the doctor in front of him might be a bit taken aback by this statement.

The doctor could only incline his head in mute understanding, feeling like a real-estate agent driving past a "For Sale by Owner" sign. How, indeed, could someone with his limited experience and qualifications be expected to advise a construction worker with an Internet link about psychotropic medications? The Protestant Reformation has permeated medicine at last--no intermediaries needed. What's next, neurosurgery at home in twelve easy steps?

Well, prescribing antidepressants isn't brain surgery--but that's the point isn't it? I've often wondered whether, if SSRI's were as safe and effective as, say, Claritin or Zantac are for allergies or reflux, they couldn't be sold over the counter. Wouldn't that rile up two opposing groups, psychiatrists (in need of work) and woeful "Prozac in the water" commentators? Actually, a psychiatrist's expertise isn't needed when the SSRI works (a 20-year-old pre-med major could manage SSRI's from a strictly medical point of view). Rather, the hard work of psychiatry begins when the SSRI (or the tenth antidepressant tried) doesn't work, and often this is as much a function of supportive, almost spiritual witness as it is a medical role. If antidepressants became overnight much more effective, this would not generate work for psychiatrists; quite the opposite, primary care physicians would take over the role.

I left out one detail. The patient mentioned that he had previously been on Effexor, which, as a previous psychiatrist had explained to him, is not "habit-forming." He proceeded to go through two weeks of hell while trying to get off of Effexor (notorious for its withdrawal symptoms for some people). So this fellow had a case of micro-PTSD, the trauma being inept psychiatric care. I keep running into ex-patients of that one Bumbling Psychiatrist out there who vitiates trust in the profession for the rest of us. Bumbling Psychiatrist: managing SSRI's is not brain surgery, so how do you keep screwing it up?

We all play up the virtues of the drugs and play down their side effects, and in most cases this is neither sinister nor even lazy. Like most people, we want to believe that what we do is effective and helpful for those we minister to, and if we have to deceive ourselves to do it, that's only human nature--but an aspect of human nature we must keep to a minimum. For we can't always assume patients will have read the package insert.
Posted by Novalis at 3:10 AM

Actually, a psychiatrist's expertise isn't needed when the SSRI works (a 20-year-old pre-med major could manage SSRI's from a strictly medical point of view). Rather, the hard work of psychiatry begins when the SSRI (or the tenth antidepressant tried) doesn't work, and often this is as much a function of supportive, almost spiritual witness as it is a medical role.

I think I kind of needed to hear that statement.

What continues to amaze me -- a veteran of a spectacularly bad Effexor withdrawal, despite having done it with incredible care, in teensy tiny little steps, over the course of six months -- is that people who prescribe drugs of any kind fail to understand the differences between "habit-forming" (as in, whoa, this cocaine high is great and I love it and I never ever want it to stop) and the simple facts of physical withdrawal from anything the body has become accustomed to.

I also think there are far too many GPs and other suchlike folks prescribing these drugs, who really don't have a clue as to how they're supposed to work and what impact they can have on people. Is it fair to blame psychiatrists for a GP's error? No, but after having been badly burned "all those prescribing people" get mentally lumped together.