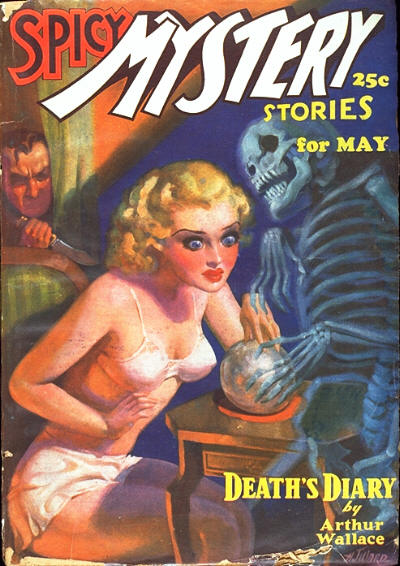 (No, not that spicy; this is a wholesome blog).

Is there a way to find the cure for this implanted in a pill
It's just the name upon the bottle, which determines if it will
Is the problem you're allergic to a well familiar name?
Do you have a problem with this one if the results are the same?

The White Stripes, "Girl, You Have no Faith in Medicine"

What care the Dead for Winter?
Themselves as easy freeze --
June Noon -- as January night --
As soon the South -- her Breeze --

1. A psychiatrist close to me met a new patient to the clinic, a young man with a documented history of schizoaffective disorder, one day after his discharge from the hospital. Faxed hospital records describe the admission, but the patient was asked what, in his view, led to the hospitalization. "Too many spices," was the mumbled reply. Further questioning failed, alas, to illuminate this response ("spices" did not mean drugs, which, atypically, were not involved in the case).
Hearkening to a libertarian streak, the doctor's spontaneous response was, "Well, if the man prefers a bland diet, who am I to object? Are we as a society going to compel him to consume spicy food?" Perhaps the patient's figurative implication was that "the world is too much with us," and that we confront too much, too fast in this, perhaps literally, maddening culture. Perhaps this man was sane in an insane place.
Perhaps, but the hospital record suggested that this cute academic formulation wasn't the whole story, so prescriptions were duly written and the fellow shuffled back out into the extravagantly seasoned world of ours. Another reminder that psychiatry, warts and all (more every day if you watch the news), seems to be a necessary evil.
2. My commute goes between barren tobacco fields and crumbling barns, that rural part of old Dixie in which seeing the Stars and Bars openly blazoned is by no means beyond the pale (interestingly though, not only this state, but this county went for Obama, albeit very narrowly). I moved here from a slave-owning but Civil War border state, and it intrigues me to speculate on the subtle cultural differences between the two states, both a hundred and fifty years ago and now. I've been reading Doris Kearns Goodwin's Team of Rivals, which title has suffered overuse in recent weeks; the Lincoln bicentennial is just two months away.
At any rate, the other morning I saw an old black hearse sitting off in a field, with a small American flagpost affixed to the driver's side window. I wasn't sure whether this was some kind of political commentary, or someone's idea of a joke, or what. Maybe I should bring my camera next time; then again, maybe I should just keep on driving by.
Posted by Novalis at 9:48 AM

That puts me in mind of an incident a number of years back.

I was at a dinner party at the home of a couple who were both Psychiatrists. The wife had prepared the dinner and we were waiting for the husband to get home. He had hospital duty that night and was delayed by having to evaluate a couple of lunatics to see if they should be admitted. They were, but it made him over an hour late to his dinner party.

When he arrived he was very irritated and before he could get his coat off he yelled out, "Damn it, why do all our patients have to be so f***ing crazy?"

Hospital ER admissions arrive at the most appallingly inconvenient times--and would you believe it, they often don't even have an appointment?

Psychiatry residents who have to take "in house" call (i.e. they literally can't leave the hospital) on a weekend know that they can expect to be bored to tears all day long, and then after nightfall, just when the call room bed starts to look promising, the patients start coming, and coming...(been there, done that).

Too much flavour, too much choice makes for a spiralling descent into the indecisiveness that is madness.

Toothpaste no longer prevents cavities -- it buys you wealth, social prestige, and success in every facet of life. The choice of toothpaste and the implication of the mere need to deliberate over which toothpaste to buy, is a symptom of a deeper spiritual cavity.

And what about wine? Studies have shown people can't even tell the difference between expensive and cheap, only the perception of the quality implied by the supposed price (but this may have something to do with quality of the tasters...)

Sometimes, rather than have the 24 course degustation menu, all you really want is 5 servings of the appetiser.