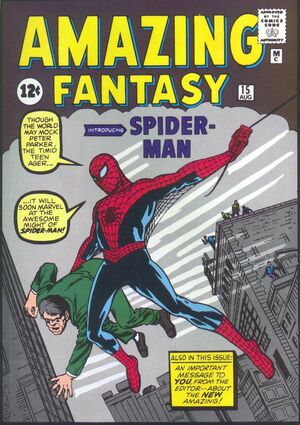 (Courtesy Marvel Comics--hope they don't mind)
Highbrow, lowbrow, highbrow, lowbrow...I guess it averages out in the end. It's a good thing the Internet is bottomless--in all the Obamamania I had managed to overlook our new President's appearance in, of all things, a Spider-Man comic book. Supposedly Obama is a Spidey collector--he is both more meticulous and better-funded than I am, so I'm guessing he has my modest stash beaten easily.
So many parallels between Obama and Peter Parker. Just as Spidey (who burst on the scene in 1962 in the issue pictured above) was an introspective and complicated hero compared to the unflappable but stiff heroes of the 1940's, so Obama aspires to a new direction after World War II and baby boomer presidents. Does that make John McCain The Vulture? Mitch McConnell the Sandman? Sarah Palin resembles the Scarlet Witch a bit, but she was a good guy. Oh that's right, we're postpartisan, it's all good now...
Posted by Novalis at 10:45 AM

According to the issue, Spidey confused Joe Biden with the Vulture at one point which seems totally unfair. There isn't that much of a resemblance...

I must admit to being a comic junkie myself (and glady reliving my comic collecting days with my sons now, in addition to a slew of other 'childish' things I never really outgrew). I had not thought of this comparison before re: Parker/Obama, but now that you mention it, I can see the similarities. One problem, though, is that Obama is, in real terms, a war time president. Perhaps a Captain America/Spider Man hybrid? Or we might take the otherwordly route altogether (in the campaign spirit of the "one") and call him Thor (calm but strong; well spoken; confident).

"So many parallels between Obama and Peter Parker."

Well, okay, except that we have many, many instances of Peter Parker -- as Parker or Spidey -- displaying physical, mental, and spiritual courage.

Obama? None that I know of and the chances of that showing up at this late date are getting slimmer by the day.

Gerard - give the guy a chance. At least Bush had a full term in office before we could declare his leadership skills dead on arrival. I don't think Obama has hit the 20 day mark yet. Besides, Hamlet didn't end well. Wouldn't you rather embrace a comic book vision, where the good guy usually wins in the end? ;)

Gerard, I have missed you--welcome back to my very modest comments page.

Are you kidding me? I read that Obama went to some kind of shindig at George Will's house. That guy is Mysterio to me. Obama/Spidey has been gladhanding Republicans right and left--any love in return?

Hamlet? No (not that there's anything wrong with that--Hamlet just wasn't meant to be an avenger, or a king).