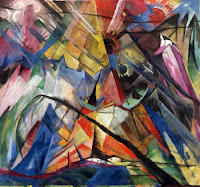 Who am I
To stand and wonder, to wait
While the wheels of fate
Slowly grind my life away.
Who am I?
Country Joe and the Fish
(Thanks to Charles Anderson for reference).

I was reading Robert Lowell again this weekend. Overall he is not one of my favorites, but every now and then a few lines of his haunt me--for instance, the final section of "Hawthorne." This for me encapsulates the Romantic's dilemma--where is spiritual significance to be found? Science gives us facts; the universe is awash with truths, but there is truth and then there is Truth. Science cannot ultimately guide us to the latter--we must rely on contingency, consensus, debate, narrative, but without appealing to ghost stories...
Hawthorne
Follow its lazy main street lounging
from the alms house to Gallows Hill
along a flat, unvaried surface
covered with wooden houses
aged by yellow drain
like the unhealthy hair of an old dog.
You'll walk to no purpose
in Hawthorne's Salem.
I cannot resilver the smudged plate.
I drop to Hawthorne, the customs officer,
measuring coal and mostly trying to keep warm--
to the stunted black schooner,
the dismal South-end dock,
the wharf-piles with their fungus of ice.
On state Street
a steeple with a glowing dial-clock
measures the weary hours,
the merciless march of professional feet.
Even this shy distrustful ego
sometimes walked on top of the blazing roof,
and felt those flashes
that char the discharged cells of the brain.
Look at the faces--
Longfellow, Lowell, Holmes and Whittier!
Study the grizzled silver of their beards.
Hawthorne's picture,
however, has a blond mustache
and golden General Custer scalp.
He looks like a Civil War officer.
He shines in the firelight. His hard
survivor's smile is touched with fire.
Leave him alone for a moment ot two,
and you'll see him with his head
bent down, brooding, brooding,
eyes fixed on some chip
some stone, some common plant,
the commonest thing,
as if it were the clue.
The disturbed eyes rise,
furtive, foiled, dissatisfied
from meditation on the true
and insignificant.
Posted by Novalis at 5:13 AM

Truth is the dissociated moment just before reason intervenes to reveal the deterministic strings that unravel the flow of unknowing sufficiency. It is the pre-epileptic aura of stillness, the dream before the storm of awakening - just a feeling of reality in spite of it not being.