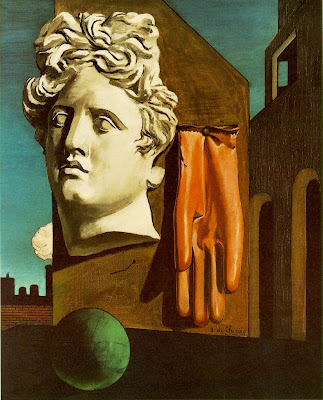 Life, friends, is boring. We must not say so.
After all, the sky flashes, the great sea yearns,
we ourselves flash and yearn,
and moreover my mother told me as a boy
(repeatingly) 'Ever to confess you're bored
means you have no
Inner Resources.' I conclude now I have no
inner resources, because I am heavy bored.
People bore me,
literature bores me, especially great literature,
Henry bores me, with his plights & gripes
as bad as achilles,
who loves people and valiant art, which bores me.
And the tranquil hills, & gin, look like a drag
and somehow a dog
has taken itself & its tail considerably away
into mountains or sea or sky, leaving
behind: me, wag.
John Berryman, "Dream Song 14"

This poem, by a suicide who was also the son of a (paternal) suicide, came to mind as I was thinking more about David Foster Wallace. Even now, nearly two years later, I occasionally come across reflections on his demise, the shock and dismay of which still linger in the reading community. It occurs to me--as I'm sure it has occurred to many although I haven't actually seen mentions of it--that Wallace was the Sylvia Plath of this generation, the literary light snuffed out by the Black Dog.
There are obvious differences: gender, genre, and age--while Plath was only 30ish, Wallace was 46, and it's possible that his best work was already behind him in any event. But why did his suicide generate more consternation than the deaths of, say, Nathanael West or Albert Camus by motor vehicle at similar ages?
The inspirational quote by Wallace cited in Retriever's post of yesterday struck me perhaps because I had recently come across a very different sort of Wallace quote; the contrast of the two pretty much sums up the conundrum of genius and madness. The quote I mean was in Daniel Carlat's Unhinged (about which more eventually I'm sure), apparently an account of depression from a Wallace story:
You are the sickness yourself....You realize all this...when you look at the black hole and it's wearing your face. That's when the Bad Thing just absolutely eats you up, or rather when you eat yourself up. When you kill yourself. All this business about people committing suicide when they're "severely depressed": we say, "Holy cow, we must do something to stop them from killing themselves!" That's wrong. Because all these people have, you see, by this time already killed themselves, where it really counts....When they "commit suicide," they're just being orderly.
This is pretty grim and implacable stuff. Does anyone know a good joke? But really, black as it is, it is a spot-on description of severe depression. The difficulty of separating the illness from the self. The relentless but narrow logic of self-destruction. And Wallace is right in implying that suicide is merely a (final) symptom, and obstructing the symptom without addressing the disease is arguably unhelpful. Pre-empting a suicide is not in itself a solution to anything except insofar as it enables attention to underlying pathology.
In his book Carlat refers to Wallace in arguing that psychiatry still has a long way to go in terms of effective treatment. It is interesting that in the past decade or two, both the explosion of antidepressant advertising (especially on television) and the controversy over widespread medicating practices have fostered the notion that antidepressants are powerful drugs. That may have been part of the Wallace surprise--while people on the street still understand on some level that suicides still happen, the notion that in 2008, twenty years after the introduction of Prozac (the threat of which was thought to be that of making too many people "better than well"), a writer of the caliber of Wallace would go and kill himself seemed, well, so 19th century, or at least, so 1963.
Wallace and Plath also had in common the fact that neither suicide was, in purely clinical terms, surprising. Both had been hospitalized and had received ECT earlier in their lives. Plath was on an early antidepressant, and Wallace had been on many of them, including the monoamine oxidase inhibitor Nardil. I don't know the details of their treatment, but it appears they had plenty of it. While terminal cases are common (indeed inevitable, right?) in all areas of medicine, terminal psychiatric cases remain frustratingly abstract--we do not have the ominous scans, biopsies, or lab results that provide the paradoxical balm of the inexorable. Oh yes, we get a feeling that a certain case isn't likely to end well, but all we can do is fight on, calling the prognosis "guarded."
Suicide continues to shock, even as understanding of depression grows; a stigma persists. It is deemed "selfish" and demeaning, and that is on the whole probably a good thing. It keeps some people, I think, from reaching the point of no return. For as Wallace's quote argues, past that point, there is no weighing of potential alternatives, there is only a sense of overwhelming necessity, no more resistible than gravity. That is why involuntary commitment exists--logic has failed.
Just as suicide was long considered a sin against God, it continues to be seen by some as a sin against Life. The suicide rejects what most of us hold most dear, and there may even be a trace of egoism in this view, on two levels (not only "How could he consider himself too good for this world?" but also "How could he not want to be part of a world that contains...me?"). In social terms, suicide threatens to startle the horses in the street as the saying goes. I'm capable of viewing depression as medically as anyone, but this moral dimension means that depression will never be as simple a matter as diabetes--the former's sinister distant cousin is acedia, or willful blindness of the true light. As many have noted, the psychiatric/therapeutic office has an element of the confessional.
Posted by Novalis at 10:03 AM

Well done. The sense "that this will not end well" can weigh heavy on relatives as well as clinicians.

I get very angry at the drug ads on TV as they imply that everyone can be completely cured, in a matter of weeks, for good. In fact, those who suffer from this Black Dog may work their way thru every form of treatment known to man and still end up a suicide.

And who knows whether it's the well chosen treatment, or accident or the hand of God, or just some well timed human kindness that averts the feared self destruction time and again?

I think of suicide as a sin, but not the victim's. I think of the disease or Satan or some chaos monster as what does the destroying. A person is not themself when they destroy themself.

It's a good point about how could you do this in a world that contains me? A variant of this was the sorrow and hurt feelings my sister and I felt when my mother kept proclaiming that she wanted to die after my father died "What are we, chopped liver?? We love you and want you around." But she just wanted to be with him again. She was dying anyway, so no suicide necessary: like many bereaved spouses, she didn't fight hard for life.

But suicide is an angry act also. It destroys the family and loved ones the person leaves behind. As Plath's son's later suicide shows, it increases the odds of children committing suicide. It rips a hole in a family.

A friend, ten years later, would still (despite therapy and a loving church home) blanch and get shakey when telling me how her sister left her clothes on the beach and swam out to sea and never came back. A note. A suicide. it is this murder of the other's spirit that leads some to call suicide a sin. It also can quite literally involve a person refusing to meet their responsibilities.

Sometimes, by the grace of God or with good care or blind luck, one can be in the maw of the Black Dog, barely able to move, but still resolve to try yet again to get better because one's children need their parent.

I think it is harder to fight suicidal impulses when one doesn't have children. The feeling of being needed can sometimes be a beacon back to life for people (tho, obviously, it didn't suffice for Plath)

Individual experience is an unknowable subjectivity. How someone can commit/contemplate suicide is infernally unanswerable. It's a completely closed psychic state, only speculatively accessible.

Interesting article I came across on depression and how it literally robs the sufferer of the physical ability to perceive contrast as acutely as a non-sufferer.

Right, the completed suicide is like an emotional black hole--information cannot escape to reach the rest of us. And yes, in the moments leading up to the suicide the person could be considered already gone, although the tragedy of suicide is that such states of total absence are usually temporary (the suicide validates the passing state by rendering it permanent). For every Plath or Wallace there are many like Joseph Conrad, who survived an early suicide attempt to achieve a literary life that, while not at all free of suffering, was emphatically worth living.