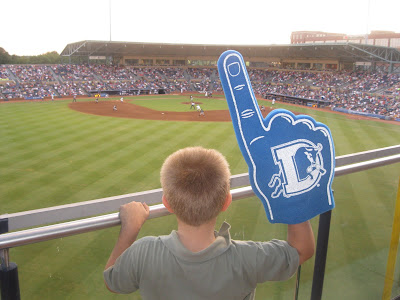 For the holiday, just a nod to David B. Hart's passionate paean to baseball, which he, tongue only obliquely in cheek, proposes as the most uniquely American contribution to culture, one that differs in kind and essence from those more cramped sports lumped together as "the oblong game:"
All of this, it seems to me, points beyond the game's physical dimensions and toward its immense spiritual horizons. When I consider baseball sub specie aeternatis, I find it impossible not to conclude that its metaphysical structure is thoroughly idealist. After all, the game is so utterly saturated by infinity. All its configurations and movements aspire to the timeless and the boundless. The oblong game is pitilessly finite: Wholly concerned as it is with conquest and shifting lines of force, it is exactly and inviolably demarcated, both spatially and temporally; having no inner unfolding narrative of its own, it does not end, but is merely curtailed, externally, by a clock (even overtime is composed only of strictly apportioned, discrete units of time).
__________________

No other game, moreover, is so mercilessly difficult to play well or affords such a scope for inevitable failure. We all know that a hitter who succeeds in only one-third of his at-bats is considered remarkable, and one who succeeds only fractionally more often is considered a prodigy of nature. Now here, certainly, is a portrait of the hapless human spirit in all its melancholy grandeur, and of the human will in all its hopeless but incessant aspiration: fleeting glory as the rarely ripening fruit of overwhelming and chronic defeat. It is this pervasive sadness that makes baseball's moments of bliss so piercing; this encircling gloom that sheds such iridescent beauty on those impossible triumphs over devastating odds so amazing when accomplished by one of the game's gods (Mays running down that ridiculously long fly at the Polo Grounds in the 1954 World Series, Ted Williams going deep in his very last appearance at the plate); and so hearbreakingly poignant when accomplished by a journeyman whose entire playing career will be marked by only onen such instant of transcendence (Ron Swoboda's diving catch off Brooks Robinson's bat in the 1969 series).
___________________

I am not nearly as certain, however, that baseball can be said to have any discernible religious meaning. Or, rather, I am not sure whether it reflects exclusively one kind of creed (it is certainly religious, through and through). Its metaphysics is equally compatible and equally incompatible with the sensibilities of any number of faiths, and of any number of schools within individual faiths; but, if it has anything resembling a theology, it is of the mystical, rather than the dogmatic, kind, and so its doctrinal content is nebulous. At its lowest, most cultic level, baseball is hospitable to such a variety of little superstitions and local pieties that it almost qualifies as a kind of primitive animism or paganism. At its highest, more speculative level, it tends toward the monist, as a consistent idealism must.
Posted by Novalis at 4:02 AM