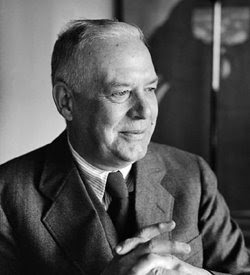 Yes, the year is failing, but on this last day of summer let's honor the sun once more, in the form of Wallace Stevens's delightful (and self-confident) lyric "Nomad Exquisite:"
As the immense dew of Florida
Brings forth
The big-finned palm
And green vine angering for life,
As the immense dew of Florida
Brings forth hymn and hymn
From the beholder,
Beholding all these green sides
And gold sides of green sides,
And blessed mornings,
Meet for the eye of the young alligator,
And lightning colors
So, in me, come flinging
Forms, flames, and the flakes of flames.
The parataxis of this poem--the repetition of phrases and words for emphasis--lends it a Biblical, majestic sort of cadence. The restatement of "immense dew" and "green sides" creates a tableau of vast fecundity, one which, in the form of the "angering" vine, is disturbing in its very intensity, much like the talent of the flame-flinging poet. We have the impression of a massive vitality that both creates and destroys. Stevens, who lived in New England for all of his 76 years (1879-1955) and wrote many fine poems featuring icy northern landscapes, traveled to Florida regularly on business and clearly relished the contrasts between the irrepressible tropics and the austerities of snow and ice. Compare "Nomad Exquisite" with his much anthologized "The Snow Man:"
One must have a mind of winter
To regard the frost and the boughs
Of the pine-trees crusted with snow;
And have been cold a long time
To behold the junipers shagged with ice,
The spruces rough in the distant glitter
Of the January sun; and not to think
Of any misery in the sound of the wind,
In the sound of a few leaves,
Which is the sound of the land
Full of the same wind
That is blowing in the same bare place
For the listener, who listens in the snow,
And, nothing himself, beholds
Nothing that is not there and the nothing that is.
Here we are in a completely different universe of feeling and perception. Unlike the "beholder" of "Nomad Exquisite," who is energized and engaged by the vital landscape, the "listener" here is rendered "nothing himself."
Wallace Stevens was a highly unusual poet for three reasons. First, he was a very late bloomer, publishing his first book of poetry at 44 and doing much of his best writing well into his sixties. Like music and mathematics, poetry at the highest level is usually a young person's game. Second, Stevens's day job--a vice-president of Hartford insurance company (no starving artist he)--seemed almost defiantly philistine. In many ways his professional work was his public face, and he wrote poetry discreetly on his own time. Maybe the folks at AIG should have read more verse.
The third thing that sets him apart is that particularly for a major poet, his life was remarkably, and outwardly at least, serene and free of overt psychopathology. Of course he had his "issues"--he was quite reserved and arguably even schizoid to a degree (he was uncomfortable in public situations to the very end of his life), and his marriage was cool and distant for many years--but his biography is remarkably free of the exotic travel, frenzied mood swings, and tumultuous love affairs that have filled many famous poets' lives. While his poetry is Romantic in many ways, his life most assuredly was not, at least from the point of view of external incident. He is surely the most unbohemian world-class poet this country has had; being so socially conventional, he was a most unconventional poet, and I for one find that refreshing.
Posted by Novalis at 9:20 AM