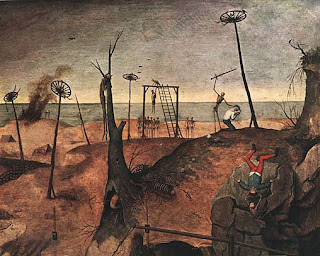 "The thin-lipped armorer,
Hephaestos, hobbled away,
Thetis of the shining breasts
Cried out in dismay
At what the god had wrought
To please her son, the strong
Iron-hearted man-slaying Achilles
Who would not live long."

I wish I had a cheerier post for a Friday, but I must recommend a painful but poignant New Yorker profile of Travis Twiggs, an Iraq war veteran with crippling Post-traumatic Stress Disorder (PTSD). It makes particularly troubling reading for anyone of the opinion that that war was ultimately unnecessary and unhelpful. In this election season, the mass and complexity of things can make power seem very abstract and distant, but stories like this one (as well as, in a very different way, the current financial crisis) restore to executive power its awful specificity and concreteness.
Some have argued that PTSD was largely a political concoction of Vietnam veterans and feminists. I think that is taking it too far; the diagnosis is the real deal, but as is all too often the case in this business, we end up spying too many nails for our diagnostic hammer. PTSD may be divided into two major categories, the first involving the generic shock of loss (the sudden death of a loved one; a natural disaster) and the second involving the revelation of human depravity and violence (war; rape and sexual abuse). Arguably the former merely detonates a latent predisposition to depression and anxiety--this can be quite severe and needful of treatment, but it does not capture the essence of what sets PTSD apart.
The core trauma of PTSD is a raw, unshielded experience of the worst that human nature has to offer; it erodes social trust and the hope that one can, after all, be at home in this world. I have often thought that Hamlet's problem is not merely the sudden loss of his father, but rather the betrayal by his uncle and his mother and the realization that Evil and moral weakness are right here, in those he thought he could trust most of all. In the New Yorker article it is suggested that PTSD may be best considered as an injury rather than a "disorder." That seems right, but it is an injury both psychological and neurological.
Travis Twiggs is described as highly confident, conscientious, and idealistic as regards the military mission. He was reportedly tormented by guilt over the loss of two men under his command, and offended by the lack of public support for the war. Just as PTSD related to rape or abuse is less about sex than about moral violation, war-related PTSD may be less about mortal terror than about the degradation of one's belief in humanity's ability to get things right. Like depression, PTSD involves the loss of what Wallace Stevens referred to as the task of poetry, giving "to life the supreme fictions without which we are unable to conceive of it."
On that note, let's go out and have a great weekend! And make sure you're registered to vote...
(Some Blogger technical glitch is preventing me from optimizing paragraph spacing; my regrets).
Posted by Novalis at 5:03 AM