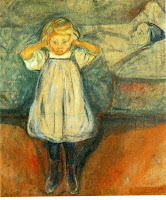 Elizabeth Bishop was an orphan, an alcoholic, and a lesbian, and a 20th century poet with a lofty reputation. Her mother was institutionalized when Bishop was a young child, and the two barely met thereafter; she struggled variably with depression and drink for most of her life. She lived in Brazil for many years, and she was famously a close friend of the (often floridly) bipolar poet Robert Lowell. For whatever reasons of style and temperament, her work is not generally a personal favorite of mine, but I do like a few of her pieces very much, including "In the Waiting Room," found here.

It is characteristic of Bishop that she tries (in this case successfully) to wring poetry from one of the least exotic of experiences: a child waiting in a dentist's office. The setting is effective as a grounding metaphor for childhood, at least as it can seem at times. There is the waiting for some experience at once mysterious, ominous and necessary; cryptic sounds and glimpses of adult activities come through the window. One feels constrained and restless--there is no going in until one is called, and yet there is no point in leaving, as one will only have to come back eventually.

The poem records a crucial moment of self-awareness, associated with the almost anthropological self-distancing embodied in the National Geographic magazine. The child's reflections mark an epochal psychological advance, from the sui generis but often monstrous egotism of early childhood to the shared world of maturity. Most striking is the potentially depressing specificity, the contingency, of what and how human beings are, seen in wide perspective ("Why should you be one, too?). For the very young child all things seem possible--an infinite number of open doors seem to beckon. For the slightly older child, who has had even a premonition of the experience in this poem, a very large number of open doors may remain, but the difference between infinity and "very large" is, well, infinity. It is a hard lesson: no, not everything is possible. Also: sure, you are "different," but not different, rather, you are merely one of many. It is a small step from this to the shock of mortality:

The waiting room was bright
and too hot. It was sliding
beneath a big black wave,
another, and another.

Arguably some adults are not as mature as the child in this poem. And while such moments of alienation can occur to anyone, arguably they are more frequent in melancholics; one definitely gets the sense that this is a "sensitive" (and precocious) child.

However, the major consolation of the limitation and vulnerability of adult humanity is compassion: we care (most of us anyway) because we know what it is to really hurt. That is why very young children can seem so cruel--they don't yet grasp vulnerability. To me the most important lines in the poem are these:

How had I come to be here,
like them, and overhear
a cry of pain that could have
got loud and worse but hadn't?

Until one reaches those lines it may not be obvious that the setting of the dentist's office, while ominous, is ultimately a place of healing. Inhuman nature is full of cries of pain that get "loud and worse." What we (should) most strive for in ourselves and in our shared community is the determination to prevent as much suffering as possible (that reminds me--I still need to register to vote after my recent move). Surely dentists agree--figuratively at least--with Katherine Hepburn's comment in The African Queen that "Nature is what we were put on earth to rise above."
Posted by Novalis at 9:47 AM

You left a comment on a persons blog mentioning you originally were looking to enter a chemistry field.

You may find this interesting.
http://chemistrycalc.blogspot.com/
I hope to hear back from you,
Jordan

“No one has ever written, painted, sculpted, modeled, built, or invented except literally to get out of hell. - Artaud”
thats what art-poetry-writing does to you. they fill the little gaps within us that makes us human and somehow along the way... make us something infinitely more.