Annals of the Prodigious 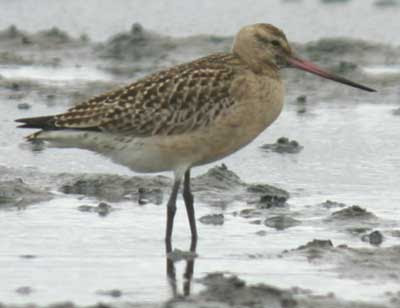 Here's a post from last night's news just for fun: the recent discovery of the longest known uninterrupted avian flight, by the bar-tailed godwit. The 7200+ mile journey from Alaska to New Zealand, which took eight days in the air without sleeping, eating, or drinking, beat the previous known migration record by over 3000 miles (not to stop even in Hawaii for a snack and a nap--that's impressive). Apparently it reflects an efficiency of energy production unsurpassed by any known vertebrate physiology. Can the godwit reduce our dependence on foreign oil? It is, alas, from Alaska.
What could it possibly be like to be a godwit, suspended above the sea for eight days and nights? It brought to mind, of course, a Dickinson poem:

A Route of Evanescence
With a revolving Wheel --
A Resonance of Emerald --
A Rush of Cochineal --
And every Blossom on the Bush
Adjusuts its tumbled Head --
The mail from Tunis, probably,
An easy Morning's Ride --
Posted by Novalis at 7:16 AM