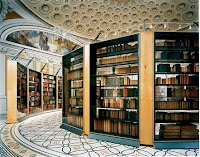 
This Humble Blogger has been feeling more prosaic than profound of late, so I was interested yesterday to read a defense of the often overlooked genre of the short story, by Steven Millhauser. He makes the (fittingly concise) case that the short story, in avoiding the bloated overreaching so often characteristic of the novel, is more capable of perfection.

I confess that while I naturally go for the underdog, I have never found the short story easy to love. Many of the virtues that Millhauser points out--the modesty, precision, and focus of smallness itself--are to be found in poetry even more than in short fiction. If I'm in the mood for an intense and potent reading experience, I'll go for the former. All too many short stories manage to be both brief and superficial. Maybe they have to be--if the characters and situations introduced were truly worthy of significant interest, they might warrant more than the ten or thirty pages devoted to them.

Short stories, while often pleasant enough and worth the limited time they require, usually leave me wanting more (much like an appetizer or snack). I don't need In Search of Lost Time necessarily--longer is obviously not always better when it comes to novels, but arguably a good eighty or one hundred pages at least are needed to deliver a decently round character profile or a compelling narrative arc. In fact, as I've written here before, the novella/short novel genre may be the best of all worlds, balancing depth and breadth.

In my Sisyphean years of trying to interest psychiatry residents in literature, we usually resorted to short stories as a way of making a virtue of necessity. (It is worth pointing out, though, that when people say they "don't have time" for something they usually mean they "don't have interest," because people manage to make time for what they really find to be a priority; it's rather more polite and face-saving however to talk about time). I found myself coming back to several canonical authors who, against the literary odds I've mentioned, manage to make supreme art out of the short story. My personal top five would be:

1. Anton Chekhov--The master of the diffident Russian soul (as Dostoevsky had the labile, impulsive Russian soul well covered) who subtly chronicled an astonishing array of psychopathology in dozens of stories.

2. James Joyce--In Dubliners he perfected the short story so completely that he saw nothing else to do but progressively dismantle his creation in future works.

3. Flannery O'Connor--She relentlessly (and with wickedly bone-dry humor) disclosed and lacerated human perversity in a way that almost makes an agnostic believe in sin.

4. Alice Munro--Chekhov reborn, she manages with her limpid, clinical detachment to endow the short story with novelistic sweep.

5. Jorge Luis Borges--He realized that literature, like philosophy, is a necessary means of clearing away deadness, of making the world unexpected and therefore interesting.

Honorable mention: Ernest Hemingway--In his early stories it is painful to see the eventual suicide view the world as fiercely but lovably beautiful.

The preceding is highly opinionated and likely depends a great deal on temperament. I enjoy beachwalking a great deal more than spelunking too, but I can't pretend to erect any aesthetic philosophy upon the fact. (Then again, most people enjoy looking at the ocean rather than into a dark, dank cave: ah, I scent a theory of human nature).

So, short story champions unite, let me know what I ought to be reading, until I have "time" for novels again at any rate...
Posted by Novalis at 3:54 PM

Your psychiatry residents would get a benefit from "analyzing" the personality of the main male character in James M. Cain's The Postman Always Rings Twice.

Then, the students should be assigned to determine how the book's title relates to the story.

I would place Isaac Babel and Raymond Carver in the elite class with honorable mentions going to Cheever and Malamud.
Vincent