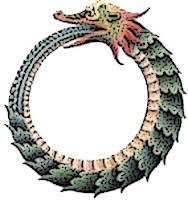 Fragments:
A six-year-old boy of my acquaintance was pestering me with questions the other day about the meaning of "infinity." He didn't get the idea from me (had I ever intended to raise a John Stuart Mill, I would have been disabused of the notion long ago); maybe it came from Toy Story (I suppose Buzz Lightyear's "To infinity and beyond!" was one of those Pixar witticisms meant for adults). "What do you add together to get infinity?" "No, what number is it?"
Like the idea of God, the idea of infinity occurs naturally to the human mind but defies practical understanding. Perhaps both of them can also be said properly to have no attributes apart from inscrutability. And both are known primarily by their absence in the world as we live it, by the shadow cast by a concept. If we could behold either of them directly, perhaps we would go mad. The perennial question, of course, is whether, in gazing at either infinity or God, we are looking through a window or into a mirror; whether we are seeing something real out there or merely a tic of our own consciousness; whether we are getting nourishment or merely a bit of our own tail; whether we are visited or haunted. At any rate, after unsuccessful attempts at clarification I suggested that the inquisitive one ask one of his teachers (and soon thereafter we were back to Spongebob). Getting through nightly first grade homework--that really does drive one mad.
-----
Some of the most acutely distraught patients I have ever seen have been men going through divorces and custody battles in which they have been deprived of access to their children (so much for evolutionary psychology, which stipulates that for men, offspring ought to come and go pretty cheaply); I have seen two such in the past week (maybe the economy is playing a role here). It brought to mind a recent insect documentary I saw which reminded me that the female praying mantis sometimes devours her partner after mating. Strange are the ways of love. Not that females (humans that is) have a monopoly on (emotional) cannibalism.
-----
Sometimes a passage pierces the heart of things. I was transfixed for some reason when I came upon this today from Nikolai Gogol's Dead Souls (translated by Richard Pevear and Larissa Volokhonsky):
Numberless as the sands of the sea are human passions, and no one resembles another, and all of them, base or beautiful, are at first obedient to man and only later become his dread rulers. Blessed is he who has chosen the most beautiful passion; his boundless bliss grows tenfold with every hour and minute, and he goes deeper and deeper into the infinite paradise of his soul. But there are passions that it is not for man to choose. They are born with him at the moment of his birth into this world, and he is not granted the power to refuse them. They are guided by a higher destiny, and they have in them something eternally calling, never ceasing throughout one's life. They are ordained to accomplish a great earthly pursuit: as a dark image, or as a bright apparition sweeping by, gladdening the world -- it makes no difference, both are equally called forth for the good unknown to man. And it may be that in this same Chichikov the passion that drives him comes not from him, and that his cold existence contains that which will later throw man down in the dust and make him kneel before the wisdom of the heavens.
Doesn't this capture the human predicament perfectly, that we are driven by passions that we do not choose, and yet are blessed (or cursed) with consciousness of the fact? Our passions endow us with the only agency we can have and yet in the end return us to that place whence we, involuntarily, came into being.
Posted by Novalis at 4:17 PM

Never read Gogol, but that's an amazing passage. Is all of Dead Souls so nice, or do you have to wade through a lot to get to those gems?

I just finished rereading it (I read it some 20 years ago in college) and found it excellent (particularly in the new translation -- Pevear and Volokhonsky have superbly retranslated most of the 19th century Russian classics).

It is a picaresque, rambling sort of book, to my mind a more amusing and less diffuse Don Quixote. Dickensian, with a sharp appreciation of human nature. His short stories are top notch too.