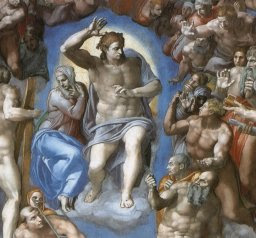 "Here's a truck stop instead of St. Peters."

1. In an article in Slate Paul Bloom considers reasons why atheists may or may not be less happy, or less "nice," than believers. As background to his piece, it bears noting that a great deal of research has looked at whether religiosity has any protective effect against mental illness. As one might expect, the results are mixed and depend a great deal upon how one defines religiosity. In general, the ritual associated with religion, and in particular the communal support of church (synagogue, mosque, etc.), seems to matter more than belief in metaphysical or religious dogma per se. And as always, correlation does not imply causation: while religious practice may alleviate psychopathology, it may also be the case that those who are less impaired by mental or emotional symptoms to begin with are also more likely to be religiously inclined. It is always hard to pinpoint where vicious, or virtuous, cycles get started.
Bloom reviews evidence that atheists in the United States tend to be less charitable and less happy, on average, than their faithful peers. There is, of course, a long debate over whether belief in God is ultimately necessary to shore up ethics (Dostoevsky: "If there is no God, then everything is possible."). Bloom points out that belief in God may have the psychological effect of feeling perpetually watched; if one feels always under the gaze of an Other, one is more likely to behave in ways morally accepted by the social group. Indeed, some evolutionary psychologists have suggested that this may have granted survival advantage to groups comprising religiously inclined members over the ages.
However, Bloom notes that in other, much more secular societies, such as Denmark and Sweden, lack of religious belief appears to be much more compatible with both happiness and ethical behavior (indeed, with respect to crime and other social parameters, Danes and Swedes are much better behaved than Americans on average). Bloom suggests that the difference is that in the United States, organized religion, although diverse in terms of denomination and ideology, nonetheless dominates communal activity.
That is, non-believers in the United States are, implicitly or explicitly depending upon circumstance, excluded from communal sources of support. American atheists may be less happy on average because they live in a predominantly faithful society. The obvious analogy here would seem to be homosexuals, who (particularly males) have higher rates of diagnosed mental illness than heterosexuals; this seems much more likely to be the effect of social discrimination and exclusion than of any inherent factors.
2. Correspondences:
I held a Jewel in my fingers
And went to sleep --
The day was warm, and winds were prosy --
I said "Twill keep" --
I woke -- and chid my honest fingers,
The Gem was gone --
And now, an Amethyst remembrance
Is all I own --
Emily Dickinson

I think I lost it
Let me know if you come across it
Let me know if I let it fall
Along a back road somewhere
Money can't replace it
No memory can erase it
And I know I'm never gonna find
Another one to compare
Lucinda Williams
(Car Wheels on a Gravel Road is one of those sublime albums in which no note seems misplaced or superfluous, and to which I never tire of listening).
Whence comes the all-too-common preoccupation with some precious thing, place, or experience that has been irrevocably lost? Call it the Romantic/neurotic gene.
3. I noted with amusement this morning that The Eagles' current gig is the "Long Road out of Eden" tour. Am I alone in finding this more than a little pretentious for a rapidly aging supergroup that hasn't come up with anything new and remarkable for decades? Maybe they were looking for an artful way of noting that their best years are long gone.
Posted by Novalis at 5:37 AM

As a fan of country music, I like Lucinda Williams' work. Her lyrics are often sheer poetry, and many songs she writes are recorded by other country artists.

Her political songs are easily ignored.

I think religious practice alleviates boredom or tends to fill in that empty space that too often becomes clogged with introspective thought and life analysis - a person who looks harder will often find more to complain about and criticise. Thus, the cons of life will appear more apparent and statistically more significant - this inevitably ups the unhappiness index.

It's like couples who never see each other: they are so happy because they never have the opportunity to argue!

Religious people tend to do more good and behave morally in an effort to shore up afterlife credit points, or to encourage good fortune into their current lives; not because they are so altruistic or whatnot.

Religiosity prevent against mental illness? If only it were so. It's more like if religiosity were present and mental illness "hit", there goes anything that has to do with God, except for the basic belief in Him (which, because you are screwed up with Him, you believe you can end up in Hell if things don't get straightened out).

According to The New York Times, atheists in California are taking their "message" to the airwaves this Christmas with commercials such as "You don't need God! Just be good for goodness sake!"