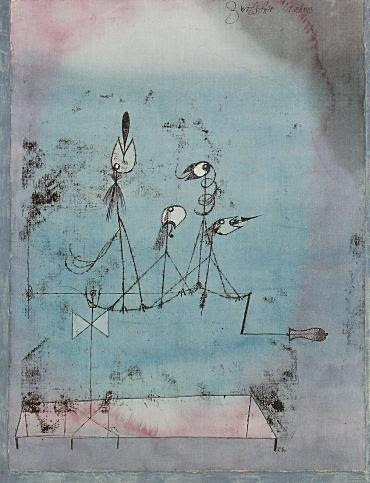 1. The resounding warnings about overuse of antipsychotic drugs in kids seems analogous to their questionable use in the elderly with dementia. In both cases there are dreadful situations (out-of-control kids and out-of-control "seniors," I suppose the current euphemism is) and the implied question, "Doctor, is there nothing that can be done?" To be sure, sheer habituation, as well as intellectual laziness--the failure to consider situational or behavioral factors--play a role, but there is also the inability for so many doctors to say, "Well, no, I suppose nothing can be done, nothing medical anyway." This is not, of course, new--as much as we like to complain about the state of things now, throughout history the foolish audacity of doctors knew no bounds (think of all the bloodletting, mercury, etc.).

2. The humbling reminder of the "organic" roots of Gulf War Syndrome (see John Grohol's post yesterday) is another installment in the centuries-long debate over psychosomatic illness. The battle lines, so to speak, are always shifting. I've never done much VA work myself, but during my medical education and training in the 1990's Gulf War Syndrome ranked up there with fibromyalgia and chronic fatigue syndrome. Indeed, Elaine Showalter's 1997 book Hystories included the former along with entities such as alien abduction syndrome and satanic ritual abuse, phenomena fueled by media hype and mass hysteria. Of course, what makes this business so fiendishly difficult is that the revelation of organic roots for such issues still in no way rules out psychological and sociological overlay in individual cases. But it is a perfect example of the always questionable assumption that medically unexplained symptoms must therefore be psychological.

3. Dear Prudence at Slate responds today to someone (apparently with schizophrenia) writing about a family wanting to perform an exorcism on him or her. This is more lurid than what I usually hear, but nothing is more common in stories of mental illness than the incomprehension and condescension of even well-intentioned family. "Get out more," "Think positively," etc. These recommendations have a grain of wisdom, of course, but usually reflect a total lack of understanding of mental illness as opposed to, say, a transient emotional funk.

4. Emily Dickinson poems and Seinfeld episodes have this in common: both are extremely pithy, and relevant examples of both can be found for any life circumstance. So a comment from last post brought this one to mind:

They say that "time assuages," --
Time never did assuage;
An actual suffering strengthens,
As sinews do, with age.
Time is a test of trouble,
But not a remedy.
If such it prove, it prove too
There was no malady.
(A stoicism out of step with our times, perhaps with any time).
Posted by Novalis at 6:20 AM

Amputees with phantom limb pain suffer on multiple fronts: physically, psychologically, socially, and spiritually. From a passive onlooker's perspective, the pain is evidently psychosomatic--the stigma of 'it's all in your head' makes the whole torturous experience even more isolating and unbearably frustrating.

People are instinctively materialistic and regardless of factual and empirical evidence to the contrary, will always believe the most emotionally sound explanation that doesn't jar too abrasively with their subconscious/ prejudicial/superstitious intuitions about the physical being more real than the psychological. The physical is permanent; the psychological is transient and changeable (especially through will power).

That's why when confronted with mental illness--despite the real pain a sufferer is experiencing--ignorant people will most likely judge it to be of inferior intensity to that experienced by someone with an 'equally' painful physical condition that's visually affirming of the sufferer's testimony.

Tangibility of physical pain confers credulity because it can be quantified and qualified by an objective outsider; whereas mental anguish is ungraspable, and slips through the fingers of description and measurement like ghostly sand.

There's that element of culpability- so the sufferer who is obviously to blame for their own condition can fix it by reversing the catastrophe they initiated.

I think, that given the choice, most people would prefer a 10 fingered baby that will later develop a destructive mental illness than a baby who will grow up to be mentally healthy but will always lack a finger. Physical perfection is more valuable than mental perfection - if such split utopias were to exist.

And satan causing schizophrenia--oh god; let's just use a scalpel and cut the beast and his minions out. No pain, no gain/loss...

Love the Dickinson and enjoying reading your blog. Would be interested to hear more about how you deal with patients (or family members) who believe strongly in evil spirits. I've got someone like that at the moment and my hunch is to try and shift them away from external factors to things they can control (their drinking, anger etc.)

Yes, I think that as in our own lives, we try to decide about people which things are givens, the landscape to be dealt with, and which are amenable to direct change. Sometimes ideologies are the former and one can only try to skirt around them.

What a cute blue Klee!