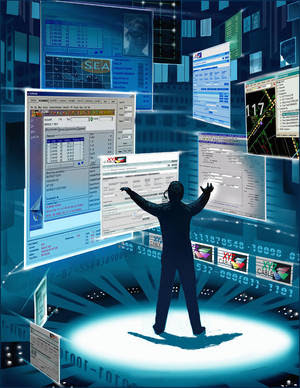 "Telephone, n. An invention of the devil which abrogates some of the advantages of making a disagreeable person keep his distance."

It's interesting to think about the future, but also dismaying, as the futurologist, much like the psychiatrist, is almost certainly destined to be mistaken. But it's irresistible. William Faulkner wrote that not only is the past never dead, it's not even past. The same could be said about the future--in a metaphysical sense perhaps nothing exists except now, this precise moment, but in another sense all past and future are always with us.

The Pew Internet and American Life Project concerns itself with such things and has released results of a survey of technological thought leaders and muckety-mucks regarding what the Internet and wireless communications in general may be like in 2020. The issues explored include the form and extent that these are likely to take, the implications for privacy and security, and the possibility that these technologies may enhance social tolerance and therefore social harmony over time. Also considered is the likely growth in virtual realities (or "reality augmentation") as a part of everyday life. (All those books I've read, and I never realized I was engaging in "reality augmentation").

In 2020 my kids will be 21 and 18. I find it a constant struggle to manage what I, for lack of a better term, call their "screen time" (which in our household includes television, computer, or handheld games). At their current ages, at any rate, they can't seem to comprehend why I would want them, every now and then, to spend a little while with a book or playing outside. So it is a kind of neurological "eat your vegetables" sort of thing.

There are of course people who allow their children very little or even no "screen time." That is a bracing sort of philosophy, but I wonder about the implications in a world that will only become more filled with screens. Fast food restaurants increasingly have televisions going, as do doctor's offices and any other public place where waiting is likely. Is keeping kids away from screens anything like keeping them away from germs or allergens?

Will people be happier in the future? If you believe the forecasts, people will only get more and more connected, at least in the virtual and wireless senses, and we know that social support can only be a good thing. However, such a world would also expose us constantly to the sight of others who may be more well-off or happy than we are, which could be bad (we know that relative goods--compared to what others enjoy--are more significant for happiness than their absolute number).

Neuronarrative today has an interesting post, an interview with brain and aging expert Gary Small, M.D. about neurological implications of some of these technologies.
Posted by Novalis at 9:13 AM

Labels: Psychiatry and the Future

With our kids (7 and 8), for every hour of "screen time" (TV and computer, no video or hand held games), they owe us 30 minutes of reading. Getting exercise is no problem as they are involved in baseball, soccer and basketball (and recently started golf lessons). They accept this without complaint as they are, like the rest of the family, avid readers.

Apart from the dwindling capacity for face-to-face social interaction/communication, and the inevitable problem of inequibale access, I think the invasiveness of future technologies will offer -- more probably than not -- fantastical positive and life enhancing opportunities, and deaden the mundanities of current mostly 'natural' existence to the point where the task of physical human body maintenance will (thankfully) become obselete.

I don't think I'll be alive when the ultimate shift from augmentation to complete supplantation of all residual 'naturalness' will occur, but I'm hoping for a brain prosthesis at least; and possibly extra detachable prosthetic limbs (amputees shouldn't have all the fun); a permament army of mutli-functional nanobots residing in my blood, patrolling and exterminating pathogens, cancer cells etc. upon inception (yay, no more sickness! don't really care for the spiritual growth accompanying the journey of cancer); an extra genome just in case I get bored...

Or what Gary Small mentioned about targeted neuron stimulation to manipulate cell communication and function -- just imagine being able to eradicate addictive behaviour or shizophrenia or bipolar or OCD, just by reprogramming a faulty subset of neural pathways to behave more...well, however you damn well choose! And then you could recalibrate the balance of neurochemicals to a more favourable cocktail.

And by permently augmenting 'real' reality with virtual, I think humanity will be on a utopian winning streak. Virtual will be so exhileratingly sophisticated that 'real' will no longer be nostalgically yearned for; in fact you could virtually experience what it was like to live in 'real' reality (if you're feeling really perverse).

We'll be human-internet integrated -- just a matter of 'willing' to be online, and your brain prosthesis will do the rest.

As a matter of fact, you may be able to effectively reign superior over your circadian rhythms, altering them to suit your chosen lifestyle, so sleep will be conveniently switchd on/off at will -- not by the demon god of insomnia!

And thought transference, will be one of the most beautiful things to eventuate. Speech will become defunct; instead, a metaphysical eloquence will make for the most accurate and poetic communication between beings, leaving nothing of former human inadequacy to be desired.

We won't have determinism thrust upon us by some deranged dice thrower. We will determine where and when the chips fall or not.

We'll lose some things, but gain the universe! Just learn to let go...are we ready?

Wow, that's optimism--I hope you're right...But if we're so smart, how come we can't invent a better antidepressant?

Sorry, that was my (less than perfect) anti-depressant talking. It's worn off now...

I predict humanity will self-destruct by 2020 (global depression)...no nanobots, no ifs, no buts...