Nature, Red in Beak and Talon 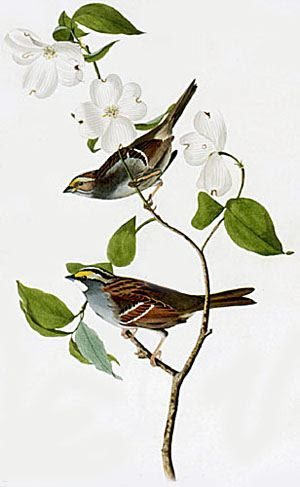 After last post I was thinking about cute and cuddly birds and airborne carnage, and was reminded of a rather different view from D. H. Lawrence:

I can imagine, in some otherworld
Primeval-dumb, far back
In that most awful stillness, that only gasped and hummed,
Humming-birds raced down the avenues.
Before anything had a soul,
While life was a heave of Matter, half inanimate,
This little bit chipped off in brilliance
And went whizzing through the slow, vast, succulent stems.
I believe there were no flowers then,
In the world where the humming-bird flashed ahead of creation.
I believe he pierced the slow vegetable veins with his long beak.
Probably he was big
As mosses, and little lizards, they say, were once big.
Probably he was a jabbing, terrifying monster.
We look at him through the wrong end of the long telescope of Time,
Luckily for us.
When this was written, in 1923, did many people suspect that birds descended from dinosaurs? They may look charming, but they may not be very nice, no, not at all.
Posted by Novalis at 5:07 AM

You know that cute manic flapping thing hummingbirds do, until their wings are just a blur? -- diversionary tactic, while they're bloody-ing their beaks with evil designs.