How Much Time Do I Have? 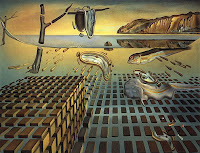 But at my back I always hear
Time's winged chariot hurrying near;
And yonder all before us lie
Deserts of vast eternity.
Andrew Marvell
A couple of weeks ago I dragged myself to the dentist, to the same office I used to go to when I lived around here before, ten years ago. (This is not, granted, an auspicious beginning for a blog post, or for any writing except perhaps a letter to one's grandmother, but bear with me). Once there I was asked whether I had seen any other dentists in the decade-long interim. I thought they were joking; they weren't (and lest you suspect the obvious, they hadn't even looked at my teeth at that point). I assured them that I never go more than nine years between visits. But the fact that they had to ask that question is a good reminder of why, for me, dentistry was safely off the list of life possibilities from very early on. But that's rather uppity of me I know--like I'm too good to be gazing into other people's oral cavities?
Deciding the frequency of medication management visits is no exact science, obviously, so except with folks that I'm particularly concerned about and who need to return soon, I usually just throw out a number, and I guess my mind usually lands on one, three, or six months depending on the person. These are arbitrary, but just have a tidy sound to them. Occasionally I may split the difference and do two or four months, but never five. There is no clinical reason why someone couldn't come every five months, it just isn't a factor of twelve. In my view even the most stable medication patient ought to check in (in person) at least twice per year, but again, I can't say this is scientific, it just feels right to me.
Psychiatrists are well known to keep patients waiting much less than do other physicians, and presumably this is the legacy of the precisely regulated 50-minute visit. But even with medication visits, I can't imagine keeping folks waiting an hour as they undoubtedly do in other doctors' offices. To some degree this is common courtesy, but it is also the case that some might find the psychiatric visit to be more stressful than a routine appointment; in other words, there may be some folks one wouldn't want to be hanging out in the waiting room for an hour or two, for their own good and that of others as well.
Many psychiatrists schedule medication visits every fifteen minutes, but I haven't been able to bring myself to do that yet. In my opinion, unless there are a significant number of no-shows or cancellations, it is hard to manage meaningful visits, even with stable folks on medications only, on that kind of schedule. The single most common complaint I hear from patients about other psychiatrists (which have included both private and community types) is that they didn't take the time. That is, they had the prescription pad poised to write from the moment the patient stepped into the room, and the patient felt rushed and not remotely listened to. In a high-functioning population with some cancellations, scheduling three per hour may be reasonable, as I did in a student counseling center I worked at. (The most common complaint I hear about other psychotherapists is that they brought up their own problems and issues too often in session; who are these people?).
Of course, if there is anything that shouldn't be one size fits all, it is psychiatry. Some patients really do only need five to ten minutes, after which we find ourselves discussing weather or sports (and I don't keep them sitting there a half hour for that). But a good number of medication patients need a full thirty minutes, and if that's not factored into the schedule, one will either have to cut people off or get behind and keep people waiting. Medication management, though, is more nebulous in this regard than the classic "50-minute hour."
Not really ambitious this rainy Sunday--the drops fall and the minutes tick by...
Posted by Novalis at 10:09 AM

I'm of the wisdom/philosophy/ignorance/delusion/cowardice that if you practice excellent oral hygiene, then you don't need to visit a dentist every 6 months...or maybe every year...or every 10 years (!!)......(or every 12 yrs...ha!.. the near toothless horror of it all!!!)

Time is really just a toothless bastard that tries to gnaw in urgent defiance of its gummy meaninglessness...

I was "raised" on 50 minute appts--meds and therapy and after several years, switched to med mgmt with a different (very) therapist. The appts. were supposed to be 20 minutes and I rarely even got a "How have you been doing?" He went straight to the computer to see what refills I needed and then printed them out. "Do you need anything else? If not, I AM the medical director and have much to do, so I'll see you next time"--8-10 minutes tops. Fortunately, this has been rectified and I'm with a full 30 minute person now.