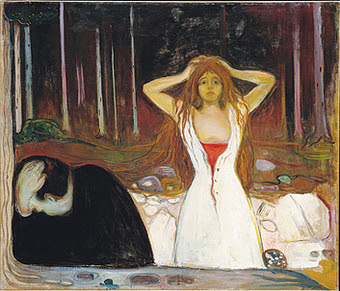 There cannot be a pinch in death
More sharp than this is.
Imogen (Cymbeline)
I was thinking yesterday about the benzodiazepines (Valium/diazepam, Klonopin/clonazepam, Ativan/lorazepam, Xanax/alprazolam), those somewhat disreputable but often unavoidable therapeutic reinforcements (sort of like a mercenary army, the Blackwater of anxiety treatments). Every doctor seems to have his/her unique philosophy about these drugs, ranging from benzos-as-Tylenol to benzos-as-Four-Horsemen-of-the-Apocalypse. Indeed, the sheer variety of benzo perspectives one encounters pretty much guarantees that ideology more than science or pragmatism is at work. And like much prescribing and diagnosing that goes on in psychiatry, benzos are both overdone and underdone depending on the situation.
My understanding of a substance use disorder is continued use of a substance despite ongoing detrimental effects, whether to health, finances, legal status, work, or relationships. Depending on severity, it may involve involuntary cravings for the substance, desperate attempts to obtain it, and the development of tolerance and potential withdrawal. As is the case for opioids and pain treatment and for stimulants and ADHD, though, the handling of benzos can involve some ambiguous situations.
The central conceptual problem is trying to distinguish recreational euphoria from real relief from ongoing distress, a relief that in itself can seem like a kind of euphoria. After all, a frequent complain among doctors about benzos involves those patients who come in specifically asking for them. To many clinicians this "med-seeking" behavior in itself reflects a likely abuse problem, and surely in some cases it does, but does it necessarily?
It is noteworthy that these three classes of drugs--opioids, stimulants, and benzos--are not only susceptible to abuse but are also among the most reliably effective treatments for pain, ADHD, and anxiety, respectively, especially but not only in the short term. This is no coincidence of course--they clearly have potent and pronounced effects on neurotransmitters that can, depending on the patient, induce therapeutic relief or iatrogenic problems. People in pain may "seek" Percocet, and people with ADHD who have benefited from Adderall in the past may "seek" it again.
To return to benzos, it is worth pointing out that the overall pharmacologic options for anxiety are quite limited. Sure, all the antidepressants, from MAOI's to SSRI's, have effects on anxiety, but they are neither as reliable nor as rapid as those of benzos, and antidepressant side effects are generally worse than benzo side effects (setting aside abuse liability). Beyond antidepressants, one has, for anxiety, such imperfect options as antihistamines, buspirone, atypical antipsychotics, and mood stabilizers, all of which may be plagued with weak efficacy or major side effects. And no, I'm not forgetting psychotherapy, but most of the patients I see have previously or currently tried that. (Primary care and ER docs prescribing benzos may be another matter).
So when someone comes in specifically asking for a benzo, it is at least possible that they do so because benzos have in fact been head-and-shoulders above other drugs in treating their symptoms. Why do patients not come in specifically asking for drugs like Prozac or lithium? (Well, occasionally they do, but not often). Because for depression or bipolar disorder Prozac and lithium are not as clearly superior to competing options.
Another thing doctors tend to hate is patients availing themselves of another person's medication, even if at reasonable doses (this is often from a close friend or family member and therefore more like "in the house" rather than "off the street"). This certainly has its hazards and I don't condone it, but in itself, in the absence of other red flags, could imply a person straightforwardly seeking relief rather than trying to get high. Maybe I'm being psychotically naive here, but I don't think so. Sometimes I think doctors object to such behaviors more because they tend to bypass medical decision-making than because they guarantee a drug abuse problem.
I certainly don't view benzos as panaceas and do not hand them out in a cavalier fashion. And like most psychiatrists I think, I view alprazolam as representing a significantly higher risk of addiction and potentially heinous withdrawal. But unlike some doctors apparently, I don't view patients seeking benzos as prima facie wrong. Innocent until proven guilty.
It occurs to me that just as the prescribing of opioids is somewhat concentrated in specialized pain clinics, which helps to focus attention on potential abuse problems (by random drug screens, the tracking of prescriptions, etc.), clinics devoted to the treatment of anxiety could help to defuse much of the, well, anxiety, related to benzos. Obviously some psychiatrists, particularly in academic settings, specialize in treating anxiety, but the practice is not as widespread as that of pain clinics. Maybe I'll start an anxiety clinic--in my next life.
Posted by Novalis at 5:42 AM

I have been shocked at the anecdotal evidence I have seen of Primary Care Physicians (PCPs) prescribing anti-anxiety Benzos after little or no analysis of the patient. And those patients are almost always women. Do you know of any research related to PCPs or Emergency docs prescribing Benzos to women?

No stats offhand except the fact that the majority of patients with anxiety and depression are women, both by apparent natural prevalence and help-seeking behavior. However, given that substance abuse is usually more common in males, I may be a bit more vigilant and less forthcoming with benzos particularly in young men.

ER docs seem to dole out benzos very liberally because it gets panic patients out of the ER. The harder question than whether to start someone on a benzo is what to do with someone who is already on one.

I hadn't meant the illustration to be sexist, but now I see it could be interpreted to be a pleading/demanding patient and a cringing doc...

I've known doctors to prescribe benzos without a second thought, and others that flatly refuse to prescribe them (particuarly Xanax). Few drugs, it seems, have this polarizing effect, correct? And yet everyone seems to agree that for some anxiety cases, nothing else will work as effectively. So for the docs firmly against benzos, what's their alternative for those cases? Turn the patient away or just placate them will less effective drugs?

Pretty much: I think they let them eat Celexa, Vistaril, and CBT, and if those don't work, then presumably the patient will "seek" a different doctor...

ClinkShrink and I have nearly killed each other over this issue, it's on one of particularly shrieky podcasts.

You downplay the addictive issues. And the uncertainty that when you start a benzo, you don't know who will get addicted and who won't-- there' the risk.

Benzos are great for episodic anxiety and panic attacks. I've really been unimpressed with their value as a standing doses for the long haul.

And opiates also work great for post op or acute pain from an injury, or a migraine, or cancer pain, but we really don't know the impact of these medicines as long-term standing doses for chronic pain over years. We don't know people develop tolerance and dependence, seems to me they often make things work.

The Shrink Rappers aren't huge fans of these meds. (you asked). ClinkShrink tells tales of people in prison attributing their addictions to their docs, and she never uses them. I think they have a place, but only with a lot of caution.

I hope it's okay that I spoke for Clink....she can come on and fight with me if I mis-spoke her intentions.

Alcohol's a great short term miserable fix in the abstract - fraught with too many negatives to mention in the real world of cause and effect. A bit like life, really...sometimes.

Too many fine lines between extremes make for an unrefined mess of circular illogic.

I respect your opinion, although I've seen more folks complaining of docs getting them "hooked" on Effexor or Paxil than on benzos (and prisoners are well-known to attribute their problems to others).

There is also the distinction between long-term physiologic dependence (which anyone prescribed opioids or benzos long term will have) and abusive behaviors per se.

To my mind alprazolam really is in a category by itself in these respects. Sometimes I wish there were a "No Xanax" sign next to the No Smoking sign on the front door.

This, imo, is the most trenchant observation you make in the post (emphasis on the last part).

"The central conceptual problem is trying to distinguish recreational euphoria from real relief from ongoing distress, a relief that in itself can seem like a kind of euphoria."

Generally, I've been very satisfied with the balance between caution and compassion among the psychiatrists who see my patients on medication. Looking on second-hand, I must say that I haven't seen alprazolam prescribed much in recent years. Clonazepam seems like the new Xanax (well, not so new anymore) and I've seen it work well for short-term crisis situations.

This was very interesting to read. As I was going through it, I couldn't help but wonder if doctors are simply becoming more lax, prescribing medications without trying to see what is really wrong first. http://www.prozac.bz