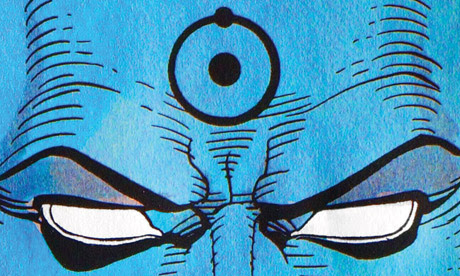 (Courtesy DC Comics and Titan Books)
Quis custodiet ipsos custodes?
Juvenal
The film version of Watchmen comes out in a couple of days, and based on early and, as they say, "mixed" reviews, it sounds like they may have managed to screw up another comic book adaptation. I was surprised to see the R rating, which means gratuitous sex and violence rather than egregious silliness. It's hard to know which is worse; but I defer judgment.
The original 12-issue Watchmen limited series by Alan Moore and Dave Gibbons came out in 1986-1987. By that time I had moved on to other things than comics, and I caught up with it only a couple of years ago after coming across high praise of the work, now compiled into graphic novel format.
The comics genre widely construed has been surprisingly celebrated in recent years, blessed with the quasi-respectability of Art Spiegelman, Chris Ware, and many others. But Watchmen may be the preeminent work that employs not only graphic methods, but in the service of a sophisticated superhero theme, and without resorting to stock favorites (the book involves a slightly alternative 1980's United States in which there have been costumed--and controversial--superheroes, but no recognizable figures such as Superman, Wonder Woman, etc.).
Watchmen has widely been hailed as having "deconstructed" (how musty that term already seems) the superhero genre. It takes seriously the reality of actual adult folks wanting to dress up and fight bad guys, and it dissects the motivations, ambiguity, and consequences involved (by implication, it refuses to patronize those with a legitimate interest in reading about costumed superheroes). Its characterization, construction, and artistic skill are first-rate; it is a compelling read that assumes no prior knowledge of comics.
Comics will never be seriously respectable, and the superhero genre may be the lowest brow of all. Yet masquerade and concealment (I'm talking to you, Anonymous) are powerful human motivations, affording empowerment and experimentation with identity. Think Halloween. Masquerade, particularly of the androgynous variety, was a central theme in Shakespeare's comedies.
Of course the superhero is about not only anonymity, but also vigilantism, and as such I suppose the genre sprang from particularly urban frustrations and anxieties (Spider-Man doesn't spend much time in Iowa). Some have criticized the superhero concept as being ultimately fascist, promising extreme and concentrated power, even if purportedly for the good, outside of the usual channels of the law. It's the great question of social theory: how is real authority found or legitimized?
One can see this as being about adolescent wish-fulfillment (much as Freud arguably saw all artistic pursuit). But as I am wont to do, I also see a kind of religious aspect to the superhero, and to the supervillain as well. The former often comes by his or her powers through a miraculous "accident," and the force for good could be seen as plenitudinous grace of a kind, unlooked for. And yet evil must have its due, its Doctor Doom, its Adversary.
Comics are fundamentally a miniature genre, packing a world not into a grain of sand, but into a scrap of paper as it were. Their soaring--and frequently absurd--intensities derive whatever pathos they can from the contrast with their lowly corporeal manifestation. Transmutation onto the big screen upsets this tension, and usually bypasses grand in favor of grandiose. A few superhero films are worth watching--Superman, Spider-Man 2, Batman Begins, Iron Man--but their tie to the humble comic is tenuous at best.
Posted by Novalis at 6:12 AM

I've seen mixed reviews as well, but I can't wait to see it. I haven't read the graphic novel, but I'm intrigued that TIME would name it one of the top 100 novels of the century. I watched a 15 minute teaser last night on HBO and I'm hooked. I think we all need to have a few adolescent vices leftover to indulge every now and again.

I can't say I'm a comic fan, but from what I've read/heard, it does intrigue me thematically - fatalism, determinism, 'fig-leaf' morality, conceptualisation of time, existence, ANONYMITY etc....(and aesthetically...It could have something to do with latex, fetishism..haha, read into that! Oh, I do joke.. or do I? I'm just EXPERIMENTING...with IDENTITY...god I'm POWERFUL!....yes, I'm talking to your shrink persona, Novalis).

I am comedy-lite of tragic proportions.

I didn't know it was on TIME's list. Interesting, although comparing a graphic novel with other conventional novels might be like comparing a drama or screenplay with a novel.

Late yesterday I saw Anthony Lane's New Yorker review of the film. He detested it, which didn't surprise me as he usually has little sympathy with fantasy or SF genres. But what is appropriately graphic on the page is often too graphic on the big screen, so I'm not expecting much. Read the book.

It's been a while since I read Watchmen but, for the life of me, I didn't know who I was supposed to be rooting for. Maybe that was the idea but a comic book (or graphic novel) without clearly defined heroes and villains seems...wrong. I always thought the point of comics books was to provide an escape from the moral ambiguities of real life. The fact that just about every comic book is now trying to drag them into the comic book universe as well is an innovation that I'm not too crazy about.