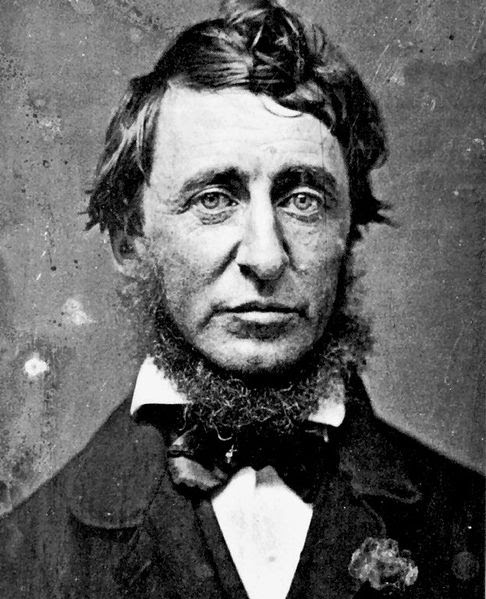 I always think about Thoreau more this time of year. It was in summer when I first read Walden some twenty years ago, and in this prodigal season the notion of giving oneself unto the wilderness seems at least not entirely mad.
Fellow blogger Retriever offers some thoughts about Thoreau this morning, and like most she is ambivalent about him. But what troubles her is that he seems "self-conscious," "full of himself," even "adolescent." Maybe, but if so, any rebel or even any prophet is these things as well.
I have always felt some affinity with Thoreau, but have also found him remote and strange; he is that perplexing quantity, the unrepresentative guide. He was extremely focused and intense, but also narrow. He saw many values in life as commonly lived to be unnecessary and wasteful, but it is easy to feel this way when one experiences no need for such things. He felt no need for (or at least disavowed any need for), among countless other things, Beethoven, wine, sex, and children. He had no patience--no experience even perhaps--of the frailties and self-indulgencies that afflict the average Homo sapiens. He would have been the personal trainer from hell.
Indeed it is as secular prophet that I tend to see Thoreau. He had his eyes not on heaven of course, but upon a different world, a radically different kind of life, than most people in the history of humanity have been content to lead. A great redwood towering alone amid a desolate but intricately beautiful plain, he offered an ideal; one keeps the tree perpetually in mind, and turns around to gaze at it now and then while going about one's business, but few go to live there. He was too pure for us, too scrupulous and uncompromising, that asymptote we can never quite reach. He would not grant that there is not just one great Good in life, but a diversity of competing goods, and that is what makes the business of living so fiendishly difficult. Truth itself has rival goods.
Even Emerson, who travelled far indeed in the realms of thought, found Thoreau to be a distant destination. In his elegy for Thoreau, he wrote:
Thoreau was sincerity itself, and might fortify the convictions of prophets in the ethical laws by his holy living. It was an affirmative experience which refused to be set aside. A truth-speaker he, capable of the most deep and strict conversation; a physician to the wounds of any soul; a friend, knowing not only the secret of friendship, but almost worshipped by those few persons who resorted to him as their confessor and prophet, and knew the deep value of his mind and great heart. He thought that without religion or devotion of some kind nothing great was ever accomplished: and he thought that the bigoted sectarian had better bear this in mind.
His virtues, of course, sometimes ran into extremes. It was easy to trace to the inexorable demand on all for exact truth that austerity which made this willing hermit more solitary even than he wished. Himself of a perfect probity, he required not less of others. He had a disgust at crime, and no worldly success would cover it. He detected paltering as readily in dignified and prosperous persons as in beggars, and with equal scorn. Such dangerous frankness was in his dealing that his admirers called him "that terrible Thoreau," as if he spoke when silent, and was still present when he had departed. I think the severity of his ideal interfered to deprive him of a healthy sufficiency of human society.
A great tree, indeed. Emerson also quoted: "I love Henry," said one of his friends, "but I cannot like him; and as for taking his arm, I should as soon think of taking the arm of an elm-tree."
Posted by Novalis at 4:52 AM

Excellent post. What immediately came to mind was this:

"Narcissism is fundamentally an evolved version of the psychological defence mechanism known as splitting. The narcissist does not regard people, situations, entities (political parties, countries, races, his workplace) as a compound of good and bad elements. He is an "all or nothing" primitive "machine" (a common metaphor among narcissists).

"He either idealises his objects or devalues them. At any given time, the objects are either all good or all bad. The bad attributes are always projected, displaced, or otherwise externalised. The good ones are internalised in order to support the inflated ("grandiose") self-concepts of the narcissist and his grandiose fantasies and to avoid the pain of deflation and disillusionment.

"The narcissist's earnestness and his (apparent) sincerity make people wonder whether he is simply detached from reality, unable to appraise it properly or willingly and knowingly distorts reality and reinterprets it, subjecting it to his self-imposed censorship. The truth is somewhere in between: the narcissist is dimly aware of the implausibility of his own constructions. He has not lost touch with reality. He is just less scrupulous in remoulding it and in ignoring its uncomfortable angles.

It just happened that I was re-reading a few pages from this book last night--interested in something else Horowitz wrote about narcissistic defenses. As I read your post, these questions occurred to me: Was Moses a narcissist? Must all prophets be narcissists?

I don't think think so, but if one doesn't believe in otherworldly grace, then perhaps an argument could be made for the notion that the singular, grandiose vision of a prophet can only be sustained by a rather inflated view of the significance of one's own vision.

And if I take a step back from the prophets and squint a little, I can see them as cultural machines or contraptions serving the vital functions of refining ideals apart from the everyday encumbrance of normal human needs and tensions.

Excellent points, bringing to mind the way that many--albeit often glibly and smirkingly--refer to politicians as "successful" narcissists (although recent governors' antics make one wonder).

Presumably this may apply to leaders of literary and spiritual persuasions as well. But you're right in hinting that society may need stark examples of uncompromising, black-or-white points of view as contrast with the infinite shades of gray ambiguity many of us swim in.

There's a fine line between narcissism and asceticism.

In order to become an ascetic, one needs to be scrupulously aware of the self and its infinitesimal parts, from its depths to its shallows, before he/she can discard it, and deny its expression. The narcissist is the mirror image; the ascetic is the mirror image/selfless subject unity. The mirror image is the antithetical spectre that necessarily haunts and nourishes the ascetic.

It's impossible to deny what one doesn't know.

Yes. I don't recall the exact quote, but somewhere in his essays T. S. Eliot, advocating his ideal of the impersonal in poetry, points out that to achieve true selflessness, one must first know--and really know--what it is to have a self.

Incidentall, I tagged you for a meme on personality traits (and then discovered of course that you'd moved). I imagine that Thoreau would have had no truck with such trivialities as memes!

If only someone would give me a nice, scenic chunk of land to live on. Then I wouldn't have to work to pay my rent, and I would have time to lie around waxing philosophical. I wonder if his writing would have been different if he hadn't had Emerson's land to live on.