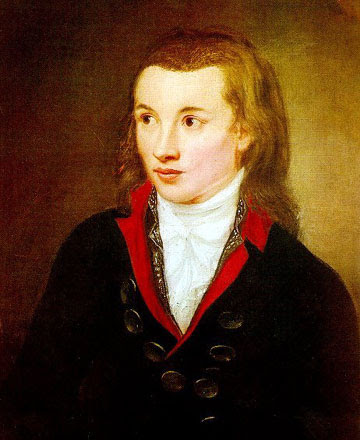 It's odd that I've never gotten around to sharing some of the real Novalis (1772-1801). Talented aphorists are a rare breed, from the transcendental (Emerson) to the empirical (Samuel Johnson) to the mordant (Oscar Wilde). Novalis's fragmentary style suited his tuberculosis-shortened life. As I was looking over a recently rediscovered volume, I was struck by some of these (all from Novalis: Pollen and Fragments, translated by Arthur Versluis):
"We seek above all the Absolute, and always find only things."
"The insignificant, mundane, raw, loathsome and ill-bred becomes through witticism alone fit for companionship. It is as if these were intended only as jokes: their destined aim is to be a joke."
"Humanity is a humorous role."
"The most ingenious insight is discerning the proper employment of insight."
"Each individual is the midpoint of an emanation-system."
"Where children are, there is a golden age."
"All enchantment is an artistic madness. All passion is an enchantment. An alluring maiden is an actual sorceress, inasmuch as one believes in her."
"A character is a completed, refined Intention."
"Bias and attachmentn are for the imagination what fog, blinding light, and colored spectacles are for the eyes."
"The higher something is, the less it overturns--rather, the more it strengthens and corrects."
"Play is experimenting with chance."
"All that is visible rests upon the invisible--the audible upon the inaudible--the felt upon the unfelt. Perhaps thinking rests upon unthinking."
"Every word is a word of incantation. Whatever spirit is called, such a one appears."
"Paradise is strewn over the earth--and therein become unknown--its scattered lineaments are bound to coalesce--its skeleton is bound to become enfleshed. Regeneration of paradise."
"Completed speculation leads back to nature."
"One could call every illness an illness of the soul."
"Poetry must never be substantive, but rather always only wonderful."
"Earnestness must glimmer cheerfully; jokes must glower soberly."
"Whoever has no sense of religion, must nevertheless have something in its place, which is for him what religion is for another--and therein originates much contention."
Posted by Novalis at 4:32 PM

Never heard of him. Every day I learn more about how ignorant I am....:)

About time too! Great stuff.

I came across a quote from Novalis in 'The Architecture of Happiness' by Alain de Botton:

'In a work of art, chaos must shimmer through the veil of order'

...or I'd even venture to say the opposite has equal truth in art & life: order shimmering through the veil of chaos.