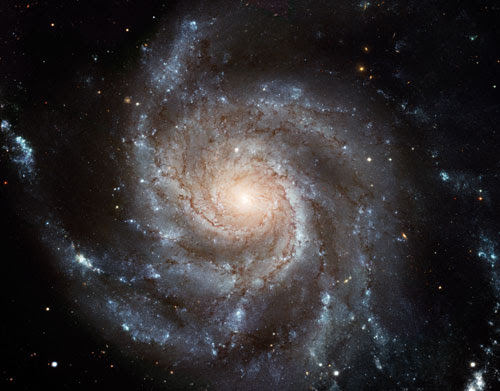 "All my daydreams are disasters
She's the one I think I love
Rivers burn and then run backwards
For her, that's enough"
Uncle Tupelo, "New Madrid"

I read Michael Benson's Far Out a while back, a compendium of the latest stunning images from the Hubble telescope, ranging from relatively nearby nebulas (a mere few thousand light years away) to the dimmest specks of galaxies whose light, 13 billion years old, streams oh-so-faintly to us from the dawn of the universe.
The images are truly spectacular, nature writ very large and very distant. But as Benson notes, they are images that, while reflective of reality, are not those that could be captured by that very imperfect instrument, the human eye. He even quotes Blake's immortal line, "If the doors of perception were cleansed, everything would appear as it is, infinite."
Science fact defeats science fiction. Of the universe beyond, say, Mars (or according to President Obama's recent decree, beyond perhaps the International Space Station), you just can't get there from here. The distances defy belief, and the glorious pictures merely tempt. Either we are alone amid unimaginable vastness, or there are likely myriad other intelligences whom we can never contact or perceive across the gulfs of space and time. Either possibility seems absurd. Someone said (was it Wittgenstein?) that if a question has no good answers, that means it wasn't a good question. We are at the limits of human cognition.
The books drove home for me the utter distinction between Godly and Godless universes. In the times and places when I have been able to hold the concept of God seriously in view, the universe seemed very small: just God and us (or me), in a metaphysically tiny room. But subtract God, and the the universe is dumbfoundingly vast, and unimaginably empty. Is there a happy medium between claustrophobia and agoraphobia? The tightrope of sanity maybe.
(What does Uncle Tupelo have to do with astronomy? A mystery).
Posted by Novalis at 4:00 PM