The Age of Anomie? 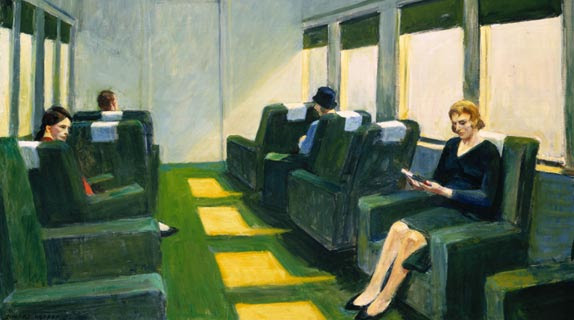 It occurs to me that on this account, according to the old SF trope, the only thing that provoke love of humanity would be an invasion by aliens. That presumably would put therapists out of business for a while. Maybe the APA can bribe them to stay away (it would be another excuse for raising dues anyway).

Extensive utilisation of psychologists/psychiatrists
by the US military is definitely motivated by 'care'. Not in th direction of the traumatised soldiers, but rather
the military apparatus itself. A well-oiled machine with greater durability of its functioning parts is more effective, and has greater moral, political and social justification for sucking society's resources in aide of bloating its superpower ego...

Is society necessarily sadder and lonelier with increasing
psychiatric needs than ever before? It's just a more complex machine, and hence has more opportunity for malfunction. The underlying genetic beast that silently writhes awaiting a provocative nudge is qualitatively the same. Society now plays multiple Russian roulette games simultaneously and each game modifies the others, sometimes attenuating their influence, other times accelerating the inevitable.

Why should people burden friends and families with their psychic ills?? (well yes, I do mean burden if there is a better alternative and a choice is made to the contrary and to everyone's detriment. There are limits to being there for someone). Psychotherapy is not a social/interpersonal cop-out. It's not about self-absorption (...maybe for some it is). It's about making the self more available/viable for the main absorption - a successful function of the social collective. Everything in its right place, always.

Yes, I agree--in the military one is fashioned into a weapon above all, and it will not do to have the blade dulled by emotional distress.

And like you say, move moving parts, or as I've written here before, more choices to a degree that bewilders.

I had funny reaction to the article. I couldn't help asking: what dog does he have in this fight? I'm not suggesting the subject is unworthy of investigation and discussion. The rapid rise of psychotherapy in the US is an interesting phenomenon. It was just a question that, for some reason, I couldn't shake off while I was reading.

Yes, that's a good way of putting it. The growing prominence of the mental health professions is usually tacitly viewed as A Bad Thing, perhaps because of the implicit sense of substitution for the weakening balms of religion. Maybe it's a bit analogous to the ubiquity of lawyers as a reflection of flawed humanity--why can't we all just naturally get along and be content?

Could it be that anxiety varies directly with knowledge and choice?

Psychotherapy is not monolithic. While the goals of some methods seem to be helping the person to be a better patient who remains in treatment longer (long term therapy better than short term) in my training in family systems the goal was to help the patient get what they need from the important people in their life and fire me ASAP.

Fortunately, love is and always will be a personal choice.