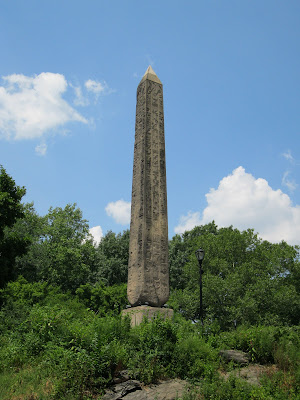 "And there's some evil mothers, well they're gonna tell you that everything is just dirt."
Velvet Underground
My great reader Retriever adduces a fine David Foster Wallace quote and suggests the necessity of worship--of something, anything--even among atheists. I agree--agnostics/atheists shouldn't hold themselves to be above reverence or the idea of the sacred. Worship is humility before the sublime coupled with self-acceptance, existing as spiritual experience.
I would argue that what distinguishes the agnostic/atheist is not worship, but rather prayer, that is, the lack thereof. Prayer is the essence of theistic religion because, no matter how subtly it is undertaken, it presupposes the existence of a divine respondent "out there," and one with a personal understanding of and care for human beings. If, as I wrote on a few posts ago, religion is chiefly about relationships, then prayer expresses those relationships. The title of Retriever's post--"Who do you worship?" (italics mine)--reflects this exactly. The essence of religion is faith in an unseen interlocutor.
Atheists are not inherently nihilistic or hopeless; as their name suggests, they are properly considered "godless," unpersuaded by the myriad contingently cultural conceptions of supernatural agency. They needn't be against God; they merely have no convincing philosophical or personal experience of (her), so they feel it makes sense to live their lives under the assumption that (She) does not exist. An atheistic may, in the broad sense, worship many things (ideals, humanity, objects of beauty), but s/he worhips noone, that is, no person or specific stipulated agent.
As usual Emily put it well:
My period had come for Prayer --
No other Art -- would do --
My Tactics missed a rudiment --
Creator -- Was it you?
God grows above -- so those who pray
Horizons -- must ascend --
And so I stepped upon the North
To see this Curious Friend --
His House was not -- no sign had He --
By Chimney -- nor by Door
Could I infer his Residence --
Vast Prairies of Air
Unbroken by a Settler --
Were all that I could see --
Infinitude -- Had'st Thou no Face
That I might look on Thee?
The Silence condescended --
Creation stopped -- for Me --
But awed beyond my errand --
I worshipped -- did not "pray" --
Posted by Novalis at 3:52 PM

Exactly right on the non-contradictory proposition of agnostic/atheist spirituality: a diffusion of a sense of awe; egoless instances that bespeak of a divergent/prismatic sense of awe rather than a convergent sense of awe that becomes animated in a singular entity/god.

Religion: that set of rules by which I know I'm ok...and you're not.
Isn't freedom from this the high calling?

Is Joni an evil mother!?