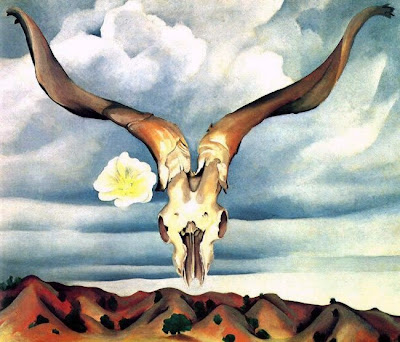 "Why, look you now, how unworthy a thing you make of me! You would play upon me, you would seem to know my stops, you would pluck out the heart of my mystery, you would sound me from my lowest note to the top of my compass; and there is much music, excellent voice, in this little organ, yet cannot you make it speak. 'Sblood, do you think I am easier to be played on than a pipe? Call me what instrument you will, though you can fret me, you cannot play upon me."
Hamlet

In the latest entry in the Times's philosophy blog, Galen Strawson trenchantly outlines both the inevitable logic gainsaying free will and the practical necessity supporting it. Rationally and scientifically, free choice can only be a mirage: a decision of what to do must stem from what one is. But what one is must in turn result from an interaction of genetic composition and environmental context; there is no room in the causal chain for some kind of ex nihilo self-creation. How can one be responsible for one's biologically and culturally contingent dispositions?
Interestingly, Strawson answers this by appeal to a novelist (Ian McEwan), who suggests another way of looking at free will, as that for which one is obliged to accept ownership. This reflects the central sociability of free will; ownership is an inherently social concept, and the conviction of free will that attends consciousness is an evolutionary means of modulating individual behavior. Free will involves that for which we must answer before our peers; human groups cannot function insofar as individuals disown their own conduct. Free will is therefore a matter of reason and language; a choice is always accompanied by at least an implicit self-justification before a virtual tribunal (this is internalized with varying degrees of integrity as conscience). From the vantage point of science, free will is a fiction, but practically speaking only the fatalistically depressed and the psychopathic disavow personal choice. Free will is located not in neurobiology, but in sociology--no emotions are more fundamentally interpersonal than guilt and shame. The mythical human being raised by wolves, without human contact or language, is by definition unfree.
So free will is located not in the brain, but "in" the group or human culture. What does this imply for the soul? I would argue that just as free will is not some kind of metaphysically magical legerdemain, the soul is not some kind of ethereal "stuff" existing separate from the brain. But the soul is not merely another name for the brain. Rather, the soul is massively distributed, consisting of vast networks of social and experiential contacts (another name for it would be "identity" or "the self").
My soul, like anyone's soul, does contain my irreducibly subjective experiences, but beyond that it entails every kind of relationship I have ever had, the work I have done, the influences I have taken in or given out. And crucially the soul has a history and a rationally supported system of values, both of which depend upon language. This is why animals, who presumably have moment-to-moment conscious subjectivity, do not have souls (that doesn't mean we should eat them though). Infants do not begin to develop a soul until language acquisition begins, and arguably the severely demented have largely lost their souls (both groups are still deserving of care and respect not only because they can still feel pain, but because regard for them is part of our souls). Having a soul is not like being pregnant--it is a matter of degree and diversity (although from the point of view of human rights and dignity, we consider all Homo sapiens to be fundamentally ensouled).
So the soul is not some kind of mysterious stuff, it is a network of ideas and relations. Most people's souls die when their bodies die or within a generation or two, but some souls live on in perpetuity, like Plato's or Muhammad's or Shakespeare's. Hitler's soul, regrettably, will have a very long life. Similarly, if we inquire about the identity of some country, the United States for example, it is obviously true that the U.S. consists of a certain part of the land mass of North America plus the bodies of some 300 million inhabitants as well as their various artifacts and structures. However, the U.S. is not merely these material conditions; for better or worse, its identity comprises a history and a system of ideals--all of this goes to make up its collective soul.
People almost universally have an intuition, whether right or wrong, that they are something beyond their bodies and brains, and in the sense in which I am speaking they are right. For the soul depends crucially upon actually lived history and relations with widely dispersed persons and phenomena. My soul contains not only my body/brain, but also my family, my profession, the Big Bang theory, the Andromeda Galaxy, the Louvre, and countless other entities. And my understanding of my soul requires that these things really exist, that they are not merely phantom firings of a deluded nervous system. The soul is very much a developmental beast: what I did yesterday defines my current soul much more than what I did twenty years ago.
Even though, from a scientific standpoint, I could not have ended up (in this universe anyway) with any other soul than the one I have, I conduct myself in explicit or implicit view of others with whom I share a mutually negotiated system of values, such that I feel obliged to keep my soul in what I consider to be the best possible condition. As with anyone, results may vary. And at times one maintains the soul with an eye not so much toward the currently available group as toward a stipulated or ideal community.
Posted by Novalis at 3:01 PM

Great exposition of the soul. No mystic beliefs required.

The soul is a multiplicity that finds expression in singular moments. An intensification of life's instances. A compendium of life's encounters, organic and inorganic. A narrative that entangles the beingness of everything in its movement. An ecstatic oneness that partakes of infinity.

A fascinating post. Relational psychoanalysts sometimes refer to the embeddedness of being within an ongoing co-creative process. There is no self apart from a continuous emergent self that is embedded in a dynamic relational field.

But then we're left with a question: what exactly is a human creation? Is it something new that blossoms unpredictably from forces over which we have some degree of control or are we along for the ride as observer-participants, influencing a constantly emerging product, having only the illusion that our influence is controlled by some sort of free agency?

I suspect that some artists might say that the subjective experience of creating art can have the feel of free agency at the very same time that they also feel they're along for the ride watching what happens when the artist in motion comes into contact with the medium. Or perhaps the artist feels like the medium or a conduit between what is and what will be.

Yes, the quandary is that experience is too complex for us to swallow it whole, so we are forever trying to isolate phenomena in order to understand and/or control them--when of course they never exist in isolation.

Excellent points you raise--I think artists are well aware of the unconscious/determined elements of creativity. The river is given, and they merely endeavor to shape it or to keep it within its banks.

As for children, perhaps no myth is so widespread or so pernicious as the notion that they are merely clay to be molded...

Very interesting.
I am not sure about what, if any value, you ascribe to "phantom firings of a deluded nervous system". I would think these are quite valid and valuable, even if they are not expressed by "me", such as abstract artworks.