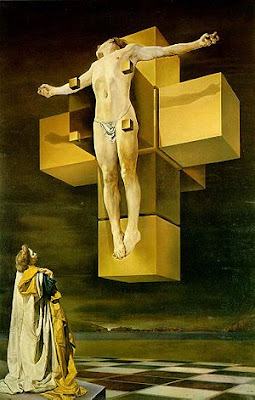 "Well, if it's a symbol, to hell with it."
Flannery O'Connor (of the Eucharist)

According to a local story, notoriously nefarious atheist Daniel Dennett's latest kick is, apparently, publishing case reports of religious hypocrisy (once again, the consistency of human behavior is shockingly cast into doubt). A United Church of Christ campus minister at Duke does not believe in "the cosmic guy in the sky," instead holding, according to the reporter, that:
God is a process of mysterious cosmic creativity that makes for greater love and justice. He thinks of God as a force working within human beings and nature, and he sees his role as trying to imitate that divine character whose greatest exemplar is Jesus.
For better or worse, I'm a pretty abstract person, but I've always been at a loss to understand what this sort of thing means. Is it Spinoza's pantheism, a congruence of nature and God? Or is it more like The Force? (There is deep wisdom in popular culture if one only knows where to look for it). Is the "cosmic creativity" also behind, say, evil (no creation without destruction)? Or is that just what makes it so mysterious?
To paraphrase something Stanley Fish once wrote, I've never been sure that religion is something that one can subtract God from and still have something left. That's why I'm not convinced that Buddhism is a religion--a profound and culturally powerful tradition of thought and practice, yes, but not a religion.
Once the possibility of the supernatural drops out, call it a fellowship, or a philosophy seminar, or a therapy group, but not a church. In fact, the minister described in the story is essentially doing pastoral therapy, that is, trying to respectfully manage belief systems in a way that is beneficial by secular standards.
And yet...there is an undeniable sense of the sacred and sublime, experiences that must be psychological, yet cannot be viewed as merely psychological. That is, they denote not the supernatural, but their essence vanishes when fussily isolated and manipulated by instrumental reason ("Let go, Luke!"). Art, love, the natural sublime, ethical practice, and (the absence of) God fall in this category of willed acceptance (the acceptance of the need for acceptance as it were), the willing suspension not of disbelief per se, but of reductionism and radical skepticism. The sacred is found where Reason averts its gaze, not for the sake of gratification or chaos, but of a greater good. It is the paradox of the mind trying to stay out of its own way, of glories glimpsed only out of the corner of the eye.
Posted by Novalis at 6:40 AM

Well done. Will post on this and link when I can come up for air. Meanwhile, am calling the Spanish Inquisition to deal with that "minister" ("nobody expects..."). First metaphor I can come up with is cafeteria worker serving cotton candy instead of meat and veg.