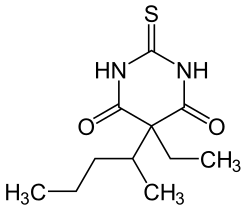 The execution of Albert G. Brown, Jr. in California has been delayed not only because of legal concerns, but also due to dwindling supplies of sodium thiopental. In my eight years of doing ECT we often had to switch back and forth between methohexital and thiopental (both barbiturates) because for whatever reason national supplies recurrently ran short. Why I wonder?
I remember that the morning of Timothy McVeigh's execution some years ago was an ECT day, and incredibly, the anesthesiologist involved (not one I usually worked with fortunately) commented before the patient was asleep that pre-ECT drugs and lethal injection drugs are similar (big differences: ECT involves supplemental oxygen and therapeutic effect; execution, not so much). When it comes to surgical types, the stereotypes are generally true.
The article mentions, to morbid and comic effect, the assurances of the spokesperson of California's Department of Corrections that adequate thiopental was available "to stop Mr. Brown's heart." Absurdly, the drug's maker then objected that its product was not "indicated for capital punishment."
Capital punishment is ultimate faith in the power of the state, which makes the conservative case for it puzzling. Execution is misguided for the same reason that suicide is misguided--in both cases death's finality overlooks the perennial possibility of human errors of judgment, whether of culpability or of the value of one's own life.
In any case, making execution into a quasi-medical procedure is a mockery. If we will celebrate death and its deterrent effect, let us haul out the gallows and the guillotine.
Posted by Novalis at 6:11 PM

I guess the law doesn't stipulate a plan B in such an event because execution by gunfire, for instance, would be less brutal but not nearly as compelling to watch as the theatricality of lethal injection - and in conjunction with the possibility of it going slightly grisly...even more riveting.

Yes, the attempt to sanitize an essentially barbaric practice ends up making it still more appalling.

Now you've gone and done it. Made me think. On my way to work...This was excellent. But am still trying to fit it into the furious,scared conversations friends and I have been have been having about the Petit trial (our neck of the woods).

My barbarous (probably fear and primitive revenge based) posiion is that these guilty men should not be tried (at a cost of millions to the taxpayer), but tried before the equivalent of a 19th century hanging judge (to have some structure) and immediately shot. Hanging is a cruel form of execution because it can take too long. Because we are a supposedly civilized society, I would suggest firing squad. Perhaps have our local grossly overpaid police force, with 50% blanks so assuage their "tender" consciences.

Am not detached enough to do your post justice, but I have been wondering lately at the justice of maintaining vicious criminals at taxpayer expense, for life, since the death penalty rarely gets imposed. One has to protect society from animals like the murderers of he Petit family, but the tenderhearted don't want to sink to their level by killing them. So instead they condemn innocent citizens of the state to pay perhaps a hundred thousand a year to guard and feed and care for and keep them locked up. Great system. So that we can feel "better" than our cruel ancestors, we pay more to keep a murderer alive than it would cost to put two people thru an Ivy league college.

And the older murderer in the Petit case had had numerous chances to reform in the prison system.

Sorry to rant. Too upset by the video footage of that poor mother in the bank.

Yes, it is a deeply complex issue, and there are undoubtedly people who deserve to die--the question is whether, in view of fallible testimony, the existence of false confessions, and even the possible mishandling of DNA evidence, the state can be trusted to justly deliver an irrevocable sentence.

If we are to avoid tender-heartedness, why is slow death or even torture a problem?

How do we save untold millions in medical and legal bills and drastically cut the murder rate? Gun control.

More relevant to your topic, isn't it barbaric to involve a physician in an execution? One dedicated to saving life, and healing...

Yes, an execution is not a medical issue any more than torture is.