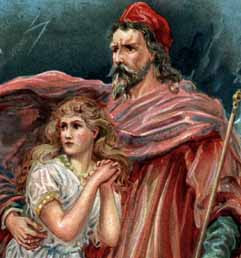 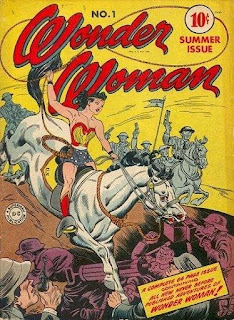 I am no McCain supporter, but I have to acknowledge that the selection of Sarah Palin was a stroke of genius (even if an accidental one). Palin brings to mind two literary domains: Wonder Woman and late Shakespeare. The former is fairly obvious: the unheralded transformation of a seemingly ordinary Diana Prince into a superhero, the bracelets deflecting (media) bullets, the golden lasso (supposedly) enforcing the pronouncement of truth (i.e. rooting out corruption). There is even an invisible airplane: the state-owned one that Palin keeps saying she sold on ebay. And the sex appeal, despite the schoolmarmish persona, is undeniable, as has been noted (Linda Carter anyone?).

But seriously, I would suggest that Palin's appeal has less to do with sex than to a different and powerful family dynamic, that of father and daughter. Let's face it, before her selection McCain was looking old, crabby, and out of touch--a man with a storied and honorable past, but a has-been (even apart from his perceived continuity with the Bush administration). Palin's attractiveness, energy, and spunk do not make him seem virile (he is, alas, too old for that), but for his political chances that is just as well; instead, she makes him seem younger, softer, and yet protective, even paternal.

As others have noted (citations not available, sorry), the father-daughter dynamic is a powerful one in Shakespeare's late phase, foreshadowed perhaps by the harrowing story of King Lear and Cordelia. This is manifest in his late "romances" such as The Winter's Tale and Pericles and culminated in the relationship between Prospero and Miranda in The Tempest. In these stories the father represents wizened experience, and even wisdom of a kind, to be sure, but experience tainted by weariness and a touchy and impulsive egotism. The naive goodness of Cordelia and Miranda challenges the tired cynicism of Lear and Prospero. While the latter clearly represents necessary authority and order, the former embodies freshness of vision and (especially given the implicit fertility of woman) hope for the future; in short, daughters bring redemption from a fallen state. While many of Shakespeare's young women are plenty resourceful (think of Rosalind), they do bring a tenderness to moderate the sternness of men. Interestingly, mothers of adult children in Shakespeare are usually either conspicuously absent or harshly problematic (where is Gertrude, I mean Hillary in all of this?).

Keep in mind here that the majority of voters are not dispassionate analyzers of political positions; in the bewildering contemporary media environment, it takes more time and energy to educate oneself about the truth of the issues than most people are willing or able to devote. Rather, most voters develop a vague gestalt about which ticket seems to best embody their values and judgment. In Palin's selection, McCain at least gave the impression of an openness that belied his crusty antiquity, and the subsequent media barrage endowed her with the vulnerability that compensated for her potentially abrasive resilience. She is a debutante, enjoying still the virtues of youth but capable of entering the wider world. In terms of policy, she may be a disaster, but in terms of reading the dynamics of gender and the generations, her selection was a masterful move. Realizing that family dramas matter and that cortical reasoning is overrated, the Republicans know their Freud better than Democrats do. The powerful family dyad of McCain and Palin arouses associations that are not primarily prurient, but rather sororal and filial. Hamlet and Polonius, that is, Obama and Biden have their work cut out for them.

Wait, did I write Hamlet? Perhaps I should write Othello, for there is that other factor that we had supposedly gotten past. But maybe not; given the racial dynamics here there's nothing like a Desdemona figure to get people thinking...
Posted by Novalis at 4:18 PM