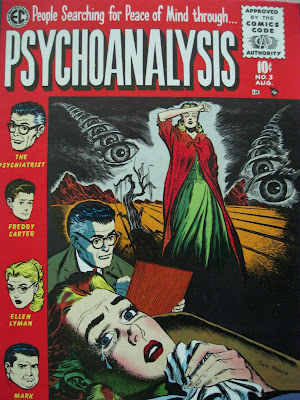 It seems as if the honey of common summer
Might be enough, as if the golden combs
Were part of a sustenance itself enough,
As if hell, so modified, had disappeared,
As if pain, no longer satanic mimicry,
Could be borne, as if we were sure to find our way.
Wallace Stevens, from "Esthetique du Mal"
To judge from the vituperative comments section of his blog, Daniel Carlat, M.D. is now apparently the Most Hated Psychiatrist in America, having offended fellow shrinks and patients alike by being honest. In his recent book, Unhinged, he bravely and forthrightly discusses the obvious, i.e., that we don't know nearly as much about the brain and about psychotropic medications as we would like, and that psychiatrists don't do psychotherapy nearly as much as they used to.
Until we have a full neurophysiological and philosophical understanding of consciousness, we will lack a complete understanding of psychotropic drugs, whether marijuana or Thorazine. Deal with it. We don't even have a full grasp of sleep, which is one of the most basic behaviors in the animal kingdom. Do we fully fathom how anesthetics work? And yet we submit to them, and to trust people to cut into our bodies while doing so. Can someone tell me exactly how the experience of pain works, and therefore how Tylenol is effective?
Indeed, one of the commenters on Carlat's blog likens psychotropics to aspirin, and I think that is an apt comparison. In all of medicine, psychiatric conditions are most similar to pain syndromes, and psychiatrists are most similar to pain management specialists. In both cases we have an imperfect account of underlying pathophysiology, but the resulting distress is clear, so we do our best to alleviate it. The DSM is a bit of a red herring; in their everyday work most psychiatrists treat symptoms.
There are of course legitimate philosophical debates about the proper place of pain in life, and no doubt we have become less tolerant of both physical and psychic distress in contemporary times, but the whole enterprise of medicine is predicated on the supposition that suffering is not inherently redemptive (it is a shame that Nietzsche lives on in the public imagination mainly with "What does not kill me makes me stronger," which is plainly wrong, or at least very selectively true). If patients come to a psychiatrist looking for a one-time fix or an indisputable explanation, they will likely be disappointed. But I would suggest that they're looking for someone who will understand and validate their suffering and offer some relief.
Any decent doctor should know that pharmacology and other technological interventions have their limitations and drawbacks--insight and behavior change should be attempted first, just as they should before, say, considering bariatric surgery for obesity. The psychiatrist's message should amount to: "I see that you are hurting. You're not alone and you're not a freak; I have seen a lot of people with similar problems. It's not your fault. I can't completely explain where your pain comes from, but I know of some things that could help."
Unless they are of the tiny minority subject to involuntary commitment, folks are free to avoid psychotropic drugs just as they may choose to steer clear of analgesics, but they shouldn't condemn those who find them helpful. The problem, as I've written here many times, is not that mental illness doesn't exist or that psychotropic drugs don't work even for symptoms (they unequivocally do, although not as completely or as often as we would like); the problem is that psychiatry has been far too confident and grandiose in its claims of diagnostic specificity and treatment efficacy.
People see psychiatrists who declare that their Major Depression is as clear and unambiguous as appendicitis might be, and that Prozac will definitely be the solution. But the majority of patients we see present with symptoms more like chronic back pain than like appendicitis. In a perfect world we would have a full understanding of back pain, such that it could be eliminated directly (or--gasp--tolerated) rather than treated with clumsy analgesic regimens. But that is a heroic ideal, not the world we live in. We need more realistic expectations, which is what Dr. Carlat has tried to supply in his blog and his book. As someone once said (oh right, Buddha), life is suffering, and since the dawn of civilization human beings have fermented, distilled, and smoked whatever they could get their hands on in an effort to tinker with flawed consciousness, and psychiatry, like pain management, is an attempt to undertake this in a way that is, yes, civilized.
Posted by Novalis at 7:46 AM

I absolutely agree. We thw psychiatrists need to think a lot more in these points.

Did you see this?

Cool--brings to mind the work on glabellar botox for depression. It is a tangled web...

So well said. Thank you.