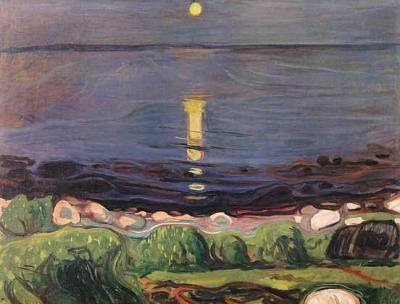 "An apple serves as well as any skull
To be the book in which to read a round,
And is as excellent, in that it is composed
Of what, like skulls, comes rotting back to ground."
Wallace Stevens, from "Le Monocle de Mon Oncle"

I've never gone in much for ghosts, but I'm reconsidering this after reading Leon Wieseltier's meditation on the presence of the unseen. He is writing about historical and cultural memory, but to be sure, there are myriad ghosts of the non-supernatural variety if we would just open our eyes and see them. Wieseltier writes, "Ghosts are the natural companions of estrangement; the invisible officers of tradition, of all the valuable things that have been declared obsolete but, in some stubborn hearts, are not obsolete. It is one of the fundamental properties of the human that the absent may be more significant than the present."
Humanity has always been locked in life-and-death struggle with its various ghosts. Monotheism sought to displace the ghosts of sky, sea, and mountain in favor of one great ghost-in-chief (of all absences, perhaps the one most present). The Enlightenment and modernity routed the fairies and ghouls of cave, dell, and stream. Perhaps the third great usurpation has been the perennial presentism of ubiquitous 24/7 Internet media, whose blinding glare renders the pre-millenial past ever more faint.
Memory, both personal and global, comprises legions of ghosts, as does the written word. Perhaps even the spoken word commemorates that which has passed--as Nietzsche wrote (and as the ever elegaic Harold Bloom was fond of quoting), "That for which we find words is something already dead in our hearts. There is always a kind of contempt in the act of speaking." In other words, we never quite catch up even to the present moment, much less the future.
I think that I have always had to work hard to free myself of ghosts. I have often felt like Frodo when the Ring was on his finger: reality dimmed and retreated and he found himself in a parallel or superimposed shadow world. At any given moment or situation, it is difficult to remind myself that "this, here is reality," for I know that "this, here" can only be the most miniscule excerpt of Reality, an atom in the universe. The ghosts vastly outnumber the living, beyond measure.
Internet media is interesting inasmuch as it locks us into a perpetual present, yet also displaces us from an actual present. The hordes of Blackberry and Facebook-checkers are not entirely "there," but they also are not haunted in any meaningful way; they are not afflicted by ghosts, rather, they and their living interlocutors are in a kind of Limbo. All virtualities are not created equal, and I prefer mine to have a history.
And then there are other specters, of alternative selves (and the persons-to-ghosts those selves would have encountered or even conceived) that occupy the paths not taken. There are ghosts of the future, those beings we think we or those we love might become. As James Surowiecki writes, procrastination can be a way of fending off or at least questioning such spirits.
Procrastination can be a manifestation of mere bewilderment or self-doubt, in which case it may help to break down a daunting or nebulous project into smaller, more concrete, and more practical stages. But as Surowiecki notes, procrastination may reflect a more basic instability in motivation, as identity is somewhat fluid and we can never be entirely sure that we will want tomorrow what we want today. He also reports--news flash!--that, believe it or not, human beings are ambivalent creatures beset with inner conflict (apparently economists and behavioral psychologists are just finding this out).
Inasmuch as it represents skepticism about distant, abstract goals in favor of more short-term rewards, procrastination may be a malady peculiar to modernity. Indeed there is a double-whammy here since complex societies demand deferred gratification at the same time that pleasurable and instant distractions grow more abundant. But there is a more fundamental existential issue. We often put things off because we are not yet sure of their value, and hope that the passage of time will clarify it, so that we can decide which among the plethora of "ghosts of the future" may become real.
Posted by Novalis at 5:24 AM