Psychosis Really is a Different Country 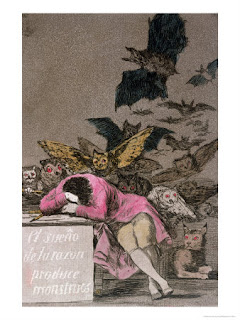 
After a few years of a mixed outpatient and ECT practice dealing mostly with the depressed and anxious, I have moved into an outpatient position with a significant number of patients with psychotic disorders (a population I worked with a great deal on an inpatient basis some years ago), and I had forgotten how strikingly different the two experiences are.

With depressed patients, the suffering is more palpable and focused; light and air seem to be sucked out of the room. With patients with refractory anxiety, there is the alarming impression of a fire that cannot be put out. There is no doubt that the chronically mentally ill (those with schizophrenia and severe bipolar disorder, whom I'll refer to as CMI) suffer, but it is a suffering more of privation than of pain per se. To be sure, there is the unique anguish of the young person with a "first break," but this is composed largely of dread, distrust, and perplexity. But most CMI patients suffer less from their specific positive symptoms than from their limitations, from lives unlived, aspirations given up, jobs lost, and relationships broken. It is not for nothing that schizophrenia was called "dementia praecox."

The frequent lack of insight introduces strange twists into the therapeutic relationship. It is hard to say that doctor and patient are working together when they can't agree on the nature of the problem, or even whether there is a problem (perhaps the doctor and the long-suffering family can be said to be working together). In fact, doctor and patient can seem to occupy parallel realities, in which the same facts--chronic problems functioning and recurrent state hospitalizations--are interpreted in opposite ways. It is interesting to try to come up with rationales for remaining in treatment for those patients who cannot be convinced that there is a problem (because you just seem to do better on medication, because otherwise you might have to go back to the hospital, because your mother will kick you out otherwise).

With the most severely impaired, those with no insight whatsoever, one is working less with the actual patient's self (which has been deformed almost beyond recognition) than with an idealized substitute of the same, a hypothesized rational self that would in fact desire a coherent value system and meaningful relationships. But there is an argument for maintaining a high threshold for this kind of substitution--one doesn't have to be besotted with antipsychiatry to stipulate considerable latitude to be mad.

And then there are the rare cases of possible misdiagnosis. Confirmation bias in psychiatry can be overwhelming--once "borderline personality disorder," "substance abuse," or "schizophrenia" appears on a chart, it may be impossible to root out even if inappropriate. The more typical case, of course, is the patient who sees nothing wrong, but whose history screams otherwise. But there are families who can abuse the petition and involuntary commitment system, and there are patients whose episodic and atypical recreational drug reactions may be misdiagnosed as schizophrenia.

A while back I saw a young woman who may have fit either or both of these categories. She had been discharged from the state hospital on low-dose Prolixin decanoate, but I could not credit the latter for her absolute lucidity which seemed utterly out of step with her diagnosis (the hospital records I had mentioned only vague "symptoms" like "belligerence" and "uncooperativeness"). Her occasional marijuana use and her conflict with her mother seemed more prominent than any psychotic process. So one occasionally picks out one who has been "sane in insane places."
Posted by Novalis at 2:43 PM

Hi,
I think your blog is terrific, and I would like to feature you on Wellsphere (http://www.wellsphere.com). Would you drop me an email?
Good health!
Geoff
--
Geoffrey W. Rutledge, MD, PhD
http://medblog.wellsphere.com

I can't seem to find a direct email on your blog--can you post it here?