Gentlemen, we can rebuild (her)... 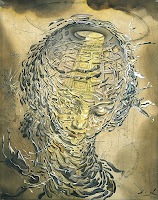 "O that this too too solid flesh would melt,
Thaw, and resolve itself into a dew..."


"I know that I would die if I could come back new."


We have the technology. Sherwin Nuland has written an intriguing review in The New Republic of a look at contemporary cosmetic surgery: Anthony Elliott's Making the Cut: How Cosmetic Surgery is Transforming Our Lives. Business is booming of course, particularly in Asia, where self-enhancement offers are folded into exotic vacation packages. Nuland describes the ways in which the predominance of celebrity culture has dovetailed with traditional marketing techniques (e.g. satisfying desire while simultaneously stimulating the desire for more) to make cosmetic surgery more mainstream than ever before. He makes the important point that such procedures are less about individual or idiosyncratic vanity than they used to be; rather, they are about simple consumer behavior on the one hand (youthful appearance as commodity) and a somewhat grim need to keep up with the Joneses on the other (age discrimination in many occupations is very real).

I checked out http://www.cosmeticsurgery.com/ to see what I might be able to afford, I mean, to get a sociological look at what's out there. In addition to the standards, and some intimate bits I'll pass on here, I was surprised to see "calf augmentation" (hate those skinny calves), buttock implants (oh my), and something appallingly called Brazilian Butt Lift Autologous Fat Transfer (my God!). Actually, derriere enhancement is apparently quite the thing in some circles, as a fascinating Slate slide show illustrated. One should not dismiss this sort of thing out of hand; one of the most hilarious moments in Seinfeld (and of course also one of the most deeply moving) was a Calvin Klein executive's comment, vis a vis Kramer, that "His buttocks are sublime!" (Episode: "The Pick")

It occurs to me that while in many occupations the appearance of youth, at least, may be advantageous, medicine and psychotherapy are exceptions to this. In fact, many novice physicians and therapists wouldn't mind looking a decade or two older for their patients, if for no one else. Nuland's review mentions women bringing in pictures of Angelina Jolie to guide their plastic surgeons. What ambitious young analyst would mind a resemblance at least to The Master (and while you're at it, doc, can you surgically graft a cigar to my hand)? Heck, even some callow female analysts-in-training might not mind a little bit of the Freud facial structure (beard optional).

The "deep" question, of course, is how much do we have ownership of our own identity? "Ownership" bears a wicked double meaning, both moral and economic, in this context. And at what point does the desire for self-enhancement become tantamout to self-loathing, an inability to accept what one contingently is? At what point does cosmetic surgery become self-mutilation (strangely enough, by proxy of the surgeon)? And if we do allow our identities to come under the sway of social demands and market forces, is this any worse than the fundamental contingency that our inborn identity already has by virtue of evolution?

If we recognize at some point that we are being gradually remade by our culture ("extreme makeover" indeed), albeit in more gradual and subtle form than was the case for Blade Runner's Rachael, how is this different than the growing realization in today's biology that our emotional and moral lives are more specifically shaped by evolution than we were aware of? Whether we are shaped by God, by evolution, or by the cultural pressures of other humans, the strange tension of self-consciousness and freedom remains. The basic difference, I guess, is that we trust God and evolution to be benign and neutral, respectively, whereas we cannot be so sure that others are not subverting us for their own ends.

Philosophically it turns out to be pretty much impossible to show when we are ultimately (that is, metaphysically) free; however, it is much easier to know those cases when we are not, e.g. when we are implicitly or explicitly controlled by others. In feminist theory there is talk of "deformed desires," as if one cannot possibly freely choose something that also happens to be desired of one by other people or by society at large. When a woman goes the cosmetic surgery route, or even when a woman decides to leave her job and raise the kids, who is really in control, she or subtle or not-so-subtle social forces? We seem to develop indivdual and social narratives of identity that provide the best kind of answer we can hope for. If the fundamentals of humanity are self-consciousness, language, and technology, then one might say that even if we "enhance" ourselves beyond easy recognition, we remain human, all-too-human (the essence of human identity is...the fact that our identity is always open to question).

But (!), a more basic question remains--should I in fact be worried about my buttocks?

Yes, you should be worried about your buttocks..

I knew it--very worried indeed. Well, the kids may just have a light Christmas this year.